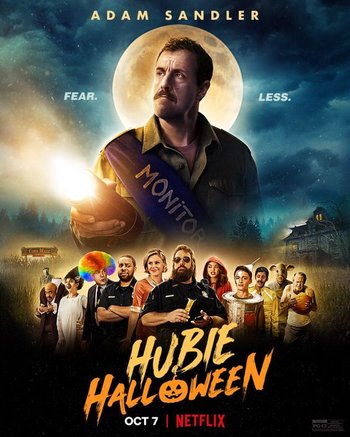 Hubie Halloween is a 2020 Horror Comedy film released by Netflix, directed by Steven Brill and co-written by its star, Adam Sandler. Also in the cast are Kevin James, Julie Bowen, Ray Liotta, Rob Schneider, Kenan Thompson, Steve Buscemi, and Maya Rudolph among others.

Hubie Dubois (Sandler) loves Halloween and his hometown of Salem, Massachusetts. However, the people of Salem don't exactly love him back. Hubie spends his days being tormented by both young and old for cruel entertainment, but he never lets it get his spirit down.

This Halloween, however, there is more to deal with than egg-wielding hooligans and kids ignoring candy etiquette. A dangerous mental patient is on the loose, a werewolf may have moved in next door, and townspeople are disappearing. Hubie just may be the only one who can save Halloween and the ungrateful jerks of Salem.