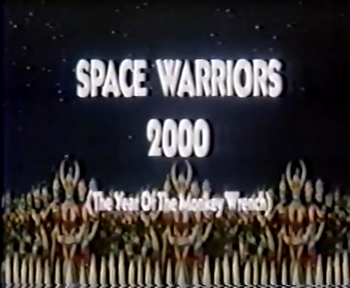 The one Ultraman work you probably won't see in Tsuburaya's catalogue
"Do you know who I am?! I'm Mr. Bad!"
— An actual line from the movie spoken by Red King
Advertisement:

In 1985, Sompote "Sands" Saengduenchai, head of Thailand's Chaiyo Productions and most notorious for his long-running attempts to steal the international distributions rights to the Ultra Series from Tsuburaya Productions, worked with American producers Dick Randall and Steve Minasian (known for their work on horror movies like Slaughter High, Don't Open Till Christmas, and Pieces) to make a 90-minute movie that would be shown for US television. Using a 1984 Thai reissue of Chaiyo's own Hanuman vs. 7 Ultraman that had been combined with footage from TsuPro's Ultraman Zoffy: Ultra Warriors Vs. The Giant Monster Army compilation movie and Ultraman Story, the two made what is easily the most bizarre piece of work ever created for the Ultra Series in its 50+ year history. Its name was Space Warriors 2000.

The movie's plot (if it can be called that) begins with an American boy named Nicholas whose father has returned from a business trip with a present — an Ultraman action figure. What Nicholas doesn't know is that his dad bought it from a nice old lady, whose husband is not pleased with this for the Ultraman figurine was given to him for safekeeping "until the time a pure of heart individual is chosen to save the Earth". Nicholas soon learns this same story when the Ultraman figurine speaks to him, and he is soon whisked away to M78 to join the Ultra heroes (or "Space Warriors in this case") in a great battle between good and evil.

What follows is a nonsensical series of Gag Dubbed fight scenes taken from various Showa Ultra Series. After a while, this is switched over for an abridged and slightly modified retelling of Hanuman vs. 7 Ultraman that uses the same ridiculous dubbing. Afterwards, the "Space Warriors" depart Earth, and Nicholas awakens to find out it was All Just a Dream. But that little Ultraman figurine has vanished from where he left it, and the nearby window is open wide...

Now before anyone asks, Tsuburaya Productions had no role in the production of this movie, making it completely unauthorized. And they were not amused to see Sompote up to his old tricks again. Thus, Space Warriors 2000 was quickly taken off American airwaves after TsuPro filed a lawsuit against Sompote and his American partners, and the movie has never appeared on television since.

. But be prepared for anything.