Film / The Christmas That Almost Wasn't 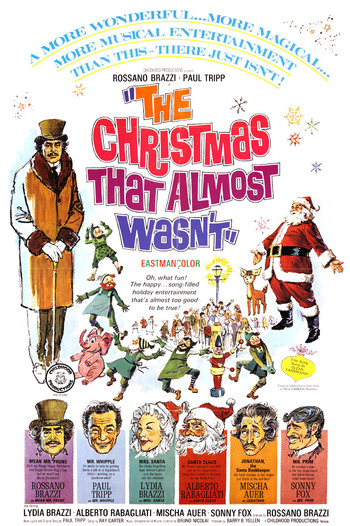 Cold-hearted landlord Phineas T. Prune (Brazzi) charges an exorbitant amount of rent to Santa Claus (Alberto Rabagliati), Mrs. Claus (Lydia Brazzi), and their elf workers up at the North Pole; Prune locks down the sleigh and Santa's gift-giving operations unless he pays through the nose. What can be done?

Enter Sam Whipple (Paul Tripp), a lawyer who, as a child, offered his help to Santa in his letter, and just before Christmas, Santa shows up to see the offer fulfilled...

Though initially released to theaters in 1966, it enjoyed a run on HBO in the '70s and early '80s. In 2017, it made a return as one of the films riffed on in the Netflix revival of Mystery Science Theater 3000. For more information on that episode, click here.

The Tropes That Almost Weren't: