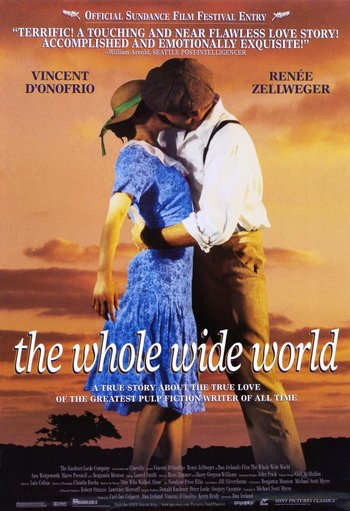 A 1996 biopic about 1930s pulp novelist Robert E. Howard, concentrating on his complicated relationship with schoolteacher Novalyne Price and based on her memoirs.

Price (Renée Zellweger), who dreams about becoming a writer herself, works as a Sunday school teacher, but when she meets Howard (Vincent D'Onofrio), her ambitions awake. She admires him and asks him for advice, even though she is appalled by the way in which he handles sexual themes in his stories. He does not share her opinion that good fiction should be true to life in the first place but she interests him as a woman and a friend. When Price fails in her desperate attempts to put an end to an abnormal relationship between Howard and his sickly mother, they break off, and she leaves to Louisiana to continue her teaching career - three weeks before Howard's suicide. Price's book was intended as a response to the prevailing opinions on Howard's life and personality, and the film explores her point of view to analyze Howard's creation and the reasons of his tragic death.

Besides being a psychological drama about love which somehow manages to be both mutual and unrequited, the film deals with such issues as: the process of achieving maturity, the nature of the connection between the mentor and his disciple, realist vs. visionary attitude towards fiction, the role of pulp (as opposed to mainstream) fiction in American culture in the 1930s, and artistic activity as a form of escapism triggered by the demands of society. The character of Conan the Barbarian is mentioned a couple of times - and it is suggested that Conan was Howard's simplified and coloured alter ego, which initially served as a channel for venting off his frustration but later became his gateway to insanity.