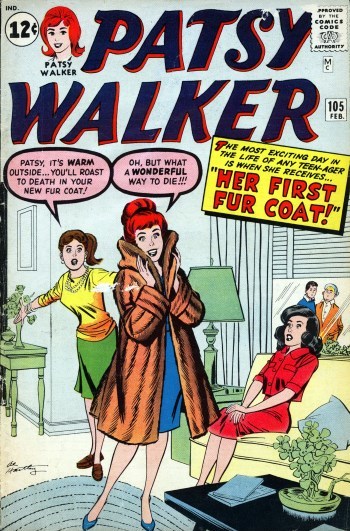 Friend: Patsy, it's warm outside... you'll roast to death in your new fur coat!
Patsy: Oh, but what a wonderful way to die!!!
— Patsy Walker (trying on a new coat

Patsy Walker, and its companion comic, Patsy and Hedy, were Marvel Comics's (initially, Timely's) major entry in the teen girls' comic genre. The character of Patsy is among Marvel's oldest, first appearing in 1944 in "Miss America" issue 2. Patsy Walker #95 was one of the first two comic book issues to carry the Marvel escutcheon.

Patsy Walker focused mainly on the spirited red-headed heroine's issues with her more straight-laced parents, her boyfriend "Buzz", and especially her rivalry with her raven-haired nemesis/vitriolic best bud, Hedy Wolfe. In fact, Patsy and Hedy seem to have spent a lot of time getting in each other's faces, messing around with each other's lives with minimal motivation, and swapping wordy put-downs and insults while staring each other down in an oddly obsessive fashion, sometimes culminating in gentle displays of affection. This has made some readers wonder a little about the subtext in their relationship... but on the basis of his body of work, this just seems to be a common character dynamic in Stan Lee's writing. (And for the record: yes, Stan Lee did write for this comic.)

The books were never gigantic sellers for Timely/Atlas/Marvel, but made themselves a quiet and profitable market niche in the character's 23-year first incarnation, especially in the 1950s after Al Hartley took over as the major artist. By the mid-1960s, the title's aesthetic had dated and Marvel's attention had long since moved from girls' humor comics, resulting in Patsy and Hedy growing up a little and becoming dashing young reporters, touring the world while frustrating the plans of various villainous pretty boys. The writing standards by this point were not up to the concept, the concept itself was not incredibly original even in 1967, and in that year the Patsy Walker-based titles were quietly discontinued.

In 1976, Patsy Walker was retooled into the superheroine Hellcat. She used the special costume abandoned by another heroine, The Cat, who now had powers of her own as a Cat Girl named Tigra. Meanwhile, "Buzz", having been married to and then divorced by her, became the amoral superpowered mercenary Mad Dog. Hedy remains in the Marvel canon as Patsy's mundane business partner. The original teen-comedy comics also remain canonical... as in-universe fiction written by Patsy's mother. Meanwhile, during a stint with The Defenders, Patsy married teammate Daimon Hellstrom — the Son of Satan! For tropes of this version of the character, see that page.

In 2015, Trish Walker made her Marvel Cinematic Universe debut as a primary character in Jessica Jones (2015), played by Rachael Taylor. This version of Trish is a syndicated radio talk show host, as well as a former model and child TV star who also serves as Jessica Jones' best friend. She also started headlining her first ongoing series, Patsy Walker, a.k.a. Hellcat!, written by Kate Leth.