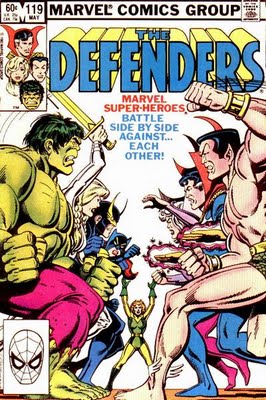 Enjoy the Mirrored Confrontation Shot.
Defenders! A fitting name for such a grouping as we —- if ever we've need to meet again.
— Doctor Strange, Marvel Feature #1
Advertisement:

The Defenders is a Marvel Comics superhero team (or un-team).

Not to be confused with the Animated Series Defenders of the Earth, or with the 1960s TV show The Defenders, which was about a group of lawyers. Or, for that matter, another TV show called The Defenders, which is also about lawyersnote This is merely about a Satanic cult, bathed in impenetrable ancient ritual involving pitiless human sacrifice, scheming for world domination out of lust for money and power. So no room for confusion, then., but semi-related to the Netflix mini-series The Defenders for reasons explained below.

The Defenders have a long and varied history. The team grew out of a couple of team-ups between Doctor Strange, The Incredible Hulk, Namor the Sub-Mariner, and the Silver Surfer in the early 1970s. The first three became the team's founding members; it should be noted that all of them were among the most powerful of Marvel's heroes who did not belong to a team yet. However, this was an unlikely alliance, as all three (and the Surfer, who briefly joined later) were more used to acting alone, especially Hulk and Namor, both of whom are more correctly antiheroes.

As mentioned, the Silver Surfer was quickly written out after his brief tryout with the team,(as at the time, Stan Lee considered him to be his pet character and was not keen on letting other writers use him) and new characters were introduced to flesh out the roster. Nighthawk, originally a Captain Ersatz for Batman but then reinvented as one for Hawkman; Daimon Hellstrom, the horror-themed hero Son Of Satan; Hellcat, originally a character from Marvel's comedy/romance comics reinvented as a Cat-themed heroine (using the costume of The Cat, who herself had become Tigra); Gargoyle, an elderly man who, while trying to cheat death, ended up trapped in the body of a demon; and The Valkyrie, a Norse goddess trapped in the body of a woman known to Hulk and Strange were brought onto the team,while Sub-Mariner was soon demoted to a recurring character within the title as opposed to being a consistent member. The group itself had loose guidelines for membership, as technically, everybody who helped them was a 'Defender' (this was lampshaded in a story where a membership drive — started without their permission or knowledge — led to a mess as both heroes wanting to join, and villains trying to pretend they were Defenders, ran into each other.) Still, the heroes listed above were the most commonly associated with the team. They tended to meet in Doctor Strange's New York brownstone, and later, in the wealthy Nighthawk's estate.

This age of the series was famous for its bizarre stories and villains; most notably: The Headmen, a group of villains with weird heads; The Elf With A Gun, a mysterious elf-like character who went around shooting people for no reason (and whom The Defenders never actually met!) and Vera Gemini, a demonic cult leader who was based on Blue Öyster Cult's songs! These stories were largely written by Steve Gerber and David Anthony Kraft, who shepherded the group for the 1970s and early 1980s.

In the early 1980s, Marvel decided to revamp the book. Nighthawk was killed off (later upgraded to a Convenient Coma), Hellcat and Daimon Hellstrom married and retired, and a (bogus?) prophecy that Doctor Strange, Hulk, Namor, and Silver Surfer would bring about the end of the world led them to leave the team. Beast (having already joined up a while back,) Valkyrie and Gargoyle reformed the group with two of the other founding member of the X-Men (Angel and Iceman), along with the morally ambiguous Moondragon, the young Atlantis warrior Andromeda, and Cloud, a gas based alien who shape-shifted into both a man and woman during its time with the Defenders. Based in Colorado, in Angel's mansion, this incarnation lasted two years before the title was canceled so that the X-Men characters could be be freed up for the upcoming X-Factor series. The entire team, save for Angel, Beast, and Iceman, died saving a possessed Moondragon.)

In the early 1990s, Marvel attempted to revive the Defenders as "Secret Defenders". This new series would have Doctor Strange organize squads of random heroes (including Wolverine, Spider-Man, Darkhawk, the second Spider-Woman, Ghost Rider, Hulk, Luke Cage, Deadpool, and many others) for one-off missions. The team made their first appearance in Fantastic Four #374 when Spider-Man, desperate to bring in the Human Torch for arson and everyone is having poor luck doing so, turns to Dr. Strange for help, who reassembles the rest of the "New Fantastic Four" (Hulk, Wolverine and Ghost Rider) to fight the Fantastic Four. Despite being considerably hyped by Marvel, the series did not do well and with the title launching coinciding with the launching of the more successful "Midnight Sons" horror sub-line (in which Doctor Strange could not take part due to Secret Defenders), it was decided to remove him from the book so that his title could be folded into the Midnight Son line. The title was then revamped with Doctor Druid as the new leader and a group of new heroes, but this new direction did little to revive interest in the book and it was quietly canceled by the end of its second year.

Ironically, before Secret Defenders launched, Marvel tested the waters not once but twice with two storylines involving the reunion of the original core Defenders. An arc in the pages of Incredible Hulk denounced the prophecy that drove the founders away from the team and the group later regrouped in the 1992 mini-annual event "Return of the Defenders", as evil demons hijacked Namor's body (sticking the hero inside Rick Jones' body) as part of a plot to summon their evil master. But the original Defenders would not be given their own title until 2002. Written by Kurt Busiek and drawn by Erik Larsen, the title had the four heroes "cursed" to teleport to random fights on behalf of the spirit of Earth known as Gaia. The series was critically and commercially unsuccessful and the title ended with a six part arc in which the book was retitled "The Order" and it was revealed that the curse from issue one was part of a greater scheme to manipulate the Defenders into turning evil and conquering the world for an evil sorcerer.

More successful, however, was Keith Giffen and Kevin McGuire's 2005 "Defenders" mini-series, which had the four face off against Dormammu and his sister Umar. The series recast the franchise as a comedy book, a la Giffen and McGuire's critically acclaimed Justice League International run, with the characters largely acknowledging the absurdity of lives as super-heroes and super-villains as well as exploring why the main four (Surfer, Namor, Hulk, and Strange) continued to associate with each other despite having nothing in common.

After the events of Civil War, Joe Casey wrote a new mini-series called "The Last Defenders", which had Nighthawk struggling to rebuild the team after being assigned to the state of New Jersey by Iron Man. The series itself explored the fan notion of the "lameness" of the original team's later members versus the bonds that existed between them: heroes assigned to the team quit on Nighthawk due to them not wanting to be associated with the "Defenders" brand and Iron Man himself constantly refused Nighthawk's attempts to recruit past Defenders like Valkyrie on the basis that said past members did not have the necessary star quality. Though the roster of the group would be finalized at the end of the mini-series, later writers (including Dan Slott, who wrote She-Hulk's ongoing book at the time) ignored it and the group vanished from sight until a Casey series called Vengeance debuted in 2011.

However, that hasn't stopped other writers from using the concept, as Jeph Loeb reunited the founders again in the pages of "Hulk", pitting Strange, Surfer, Hulk, and Namor up against "The Offenders", a quartet organized by the villainous Red Hulk that consisted of himself, Baron Mordo, Terrax, and Tiger Shark.

The 2011 crisis crossover Fear Itself teased a Defenders reunion in tie-in series "The Deep," where Strange, Namor, and Surfer (together with the mutant Loa and Lyra, Hulk's daughter) joined forces to stop Attuma, one of the eight Worthy. The tease was followed up by an announcement that Matt Fraction would be behind a new Defenders book debuting at the end of 2011 with the additions of Iron Fist and Red She-Hulk to the classic lineup. Unfortunately, this book ended after twelve issues.

As part of the Marvel NOW! relaunch, the Defenders flag was flown by Valkyrie at the head of the all-female Fearless Defenders, a title which originated in the Fear Itself tie-in, The Fearless but it was cancelled at issue 12.

In 2018, it was announced the the original Defenders were getting a series of five one-shots that connected as part of a larger story. It was called Best Defense. In 2021, they were given another mini-series written by Al Ewing and Javier Rodriguez, Defenders (2021).

In November 2013, it was announced that Marvel would be producing a Defenders TV series for Netflix. Confirmed characters include such familiar faces as Luke Cage, Daredevil, Jessica Jones, and Iron Fist. While it uses the Defenders name, it's more akin to Marvel's short lived Marvel Knights team, which focused on street-level and darker heroes. In January 2017, a comic book based on that same roster was announced, which will be written by Brian Michael Bendis. Tropes for that series should go here.