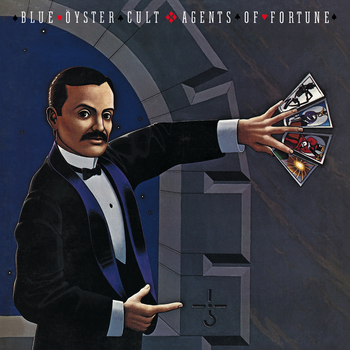 We can be like they are... Come on, baby, don't fear this album!
Advertisement:

Agents of Fortune is Blue Öyster Cult's fourth studio album, released in 1976. It was also the band's most commercially-successful release, going platinum and spawning the hits "(Don't Fear) The Reaper", "This Ain't the Summer of Love", and "E.T.I. (Extra Terrestrial Intelligence)".

While it's now regarded as BÖC's Signature Song, "(Don't Fear) The Reaper" was actually somewhat of a Black Sheep Hit for the band, as it's sung by Buck Dharma rather than regular lead singer Eric Bloom. The song is also Lighter and Softer than their usual hard rock style. To make matters worse, it was (and still is) widely misinterpreted as being a romanticization of suicide, while the band intended it to be a Pep-Talk Song against fear of death. Regardless, it's notorious enough to have named a trope on our site: Don't Fear the Reaper.

The LP was preceded by Secret Treaties and followed by Spectres.