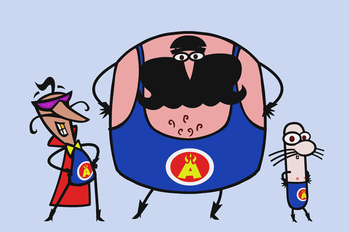 The Amazing Adrenalini Brothers themselves. In order from left to right: Xan, Adi and Enk.
Advertisement:

The Amazing Adrenalini Brothers is a British-Canadian animated series done in Adobe Flash and produced between the British studio Pesky and Canada's Studio B Productions. It aired on CITV and Cartoon Network in Britain, and on YTV in Canada.

The show is about three brothers named Xan, Enk and Adi, who travel around the world to perform dangerous stunts. They originate from Réndøosîa, a country where safety is hard to find.

This series was initially about a dozen worth of online episodes, each lasting a few minutes. They focus merely on the stunts they pull off. Afterwards, two seasons of their adventures were released to television, each season having about 39 episodes and each episode lasting half an hour.

, and it can be watched here