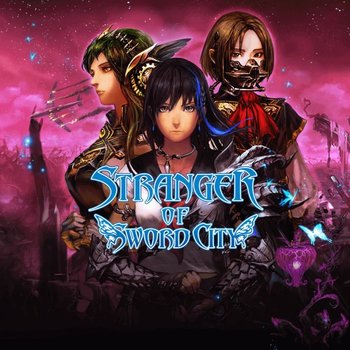 In ancient times on the world of Escario the Fallen One fought a terrible battle against the Creator. This battle tore a hole in the fabric of reality, through which the Strangers came. Who are the Strangers? Why, we are.

You are the only survivor when a plane you're riding on falls through the gate and crash lands into the Mausoleum of Metal. You would have died like all the others, had Riu, leader of the Strangers' Guild of Sword City, not rescued you from the monsters.

Far from a Fish out of Water, you find yourself possessing strange powers that allow you to battle and destroy the monsters that plague this land. More than that, you are a Chosen One, one of only three people in Escario who can destroy the powerful Lineage Type monsters by taking away their blood crystals. Along with your fellow Chosen your job is to hunt down Lineage Type monsters, take the blood crystals that give them life, and take them to Vessels, who will pass them on to the divine. Hopefully, with enough divine grace you will find a way to return home. If not, you will vanish into nothing like so many others.

Stranger of Sword City is a Dungeon RPG developed by Experience Inc. and published by Nippon Ichi Software for the Xbox 360 in 2014, and later rereleased for the PS Vita in 2015 and the Xbox One in 2016. It made a few changes to the standard DRPG formula, such as a reimagined Permadeath system, and a deeper emphasis on character creation and customization. It was most well known for its character graphics featuring the work of Yoko Tsukamoto and Oxijyen.

The loosely related prequel and remake of Students Of The Round, titled Saviors Of Sapphire Wings, was released in the US on March 16, 2021, and in Europe on the 19th, for the Nintendo Switch and PC, bundled with a remaster of the game, titled Stranger of Sword City: Revisited, which had previously been released on the Playstation Vita. See also Demon Gaze, another title in the same timeline and sharing many of the same tropes, characters, and mechanics.