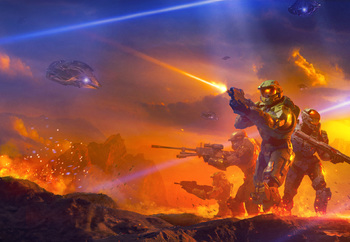 Halo: Shadows of Reach is the 30th Halo novel, released in 2020 and intended to bridge the gap between Halo 5: Guardians and Halo Infinite. It is written by Troy Denning, making this his fifth Halo novel, and the third book in the A Master Chief Story sub-series.

One year after the events of Guardians, much of the galaxy is under martial law enacted by the Created. Blue Team, under the command of John-117, are assigned a mission named Operation: WOLFE. They are to return to the ruins of CASTLE Base on Reach, which they have known since their early days in the Spartan-II program, and retrieve sensitive information that could turn the tide against the Created. Upon arriving on Reach however, they soon discover that an alien armada named the Banished have taken a foothold on the planet, and have their own interest in the secrets that lie within.

A limited edition version of the book additionally features a standalone short story, Sacrifice, which was written by 343 Industries staff and ties into Shadows of Reach.