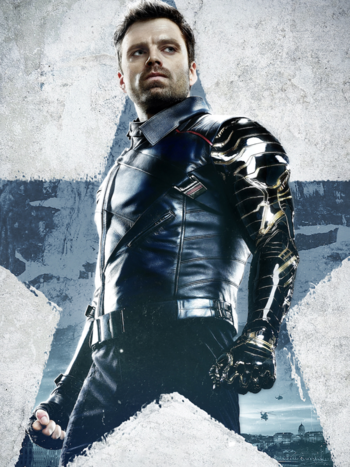 "Don't do anything stupid until I get back."
Click here to see him as the Winter Soldier 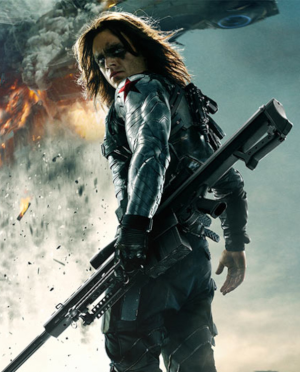 "You're my mission."
Advertisement:

Advertisement:
"I'm with you to the end of the line, pal."

James Buchanan "Bucky" Barnes was born on March 10th, 1917 in Shelbyville, Indiana. He is Steve Rogers's best and oldest friend. Companions since childhood, Bucky would often come to Steve's rescue by fending off bullies and offering him a place to stay. Soon after the attack on Pearl Harbor, the two of them enlisted, and Bucky was accepted into the Army while Steve was constantly rejected.

Bucky Barnes became a Sergeant in the 107th Infantry, but his unit was captured by the Red Skull's HYDRA forces, and made the subject of lab experiments by Dr. Zola. Bucky was then rescued by none other than his old friend Steve, now the fit and able-bodied Captain America. Along with several other POWs rescued from the HYDRA base, Bucky and Steve formed a special ops assault group, the Howling Commandos.

After falling off a train and being found by HYDRA, he was brainwashed and turned into their foremost assassin, the Winter Soldier. Over the following decades, he gained a reputation as a mysterious and deadly force with strength and cunning to match Steve Rogers' own. The Winter Soldier is rumored to have been responsible for dozens of assassinations that changed the course of history. During Rogers' new career in the modern day, the Soldier is assigned a few new targets: Director Nick Fury, then Captain America and Black Widow as they investigate the conspiracy within S.H.I.E.L.D.

After conflict with both Captain America and the Avengers, Barnes was able to be freed of his brainwashing thanks to the assistance of Wakanda. 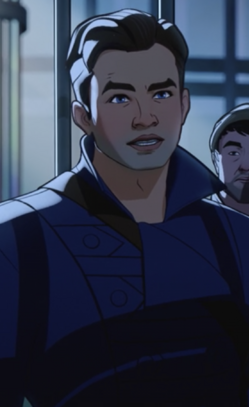 "Thanks, you almost ripped my arm off."

In an alternate timeline where Peggy became a super soldier, Bucky was never subjected to HYDRA experimentation. 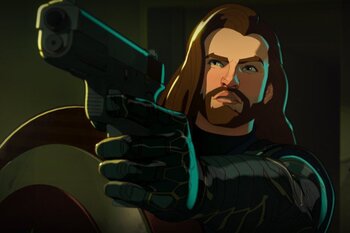 A Variant of Bucky who fights Zombie Captain America.