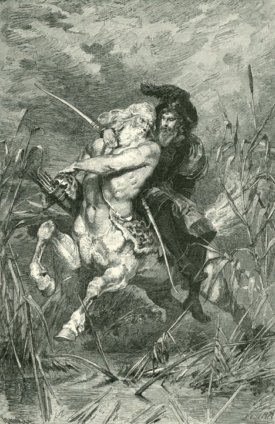 By letting him drink from the waters of Lethe, Mephistopheles makes Faust forget about Gretchen and thus regain his spirits. After some wacky hijinks at the court of the Emperor (where Mephistopheles solves the Empire's financial crisis by inventing paper money) they visit Faust’s old study, where Doctor Wagner, formerly Faust's assistant, has finally succeeded in creating the Homunculus.

Hardly created, the Homunculus says goodbye to his maker and teams up with Faust and Mephistopheles to visit Ancient Greece, where they arrive just in time to attend Classical Walpurgis Night and change the outcome of The Trojan War so that Faust can marry Helen of Troy.

They live happily in Arcadia, but their happiness does not last, as Faust and Helen's son dies and Helen vanishes into Hades. Faust and Mephistopheles arrive back on the Emperor's court, using demonic tricks to save the Emperor's armies from an attacking usurper. The Emperor grants Faust a piece of land at the sea-shore, allowing Faust to fulfill his dream of reclaiming land from the sea so that people can benefit from it.

Years pass, and one day Faust, old and powerful, is vexed by the knowledge that a nearby hill and the house of an old couple standing on it do not belong to him. He dispatches Mephistopheles and his lackeys to force the inhabitants out of the house, but the house ends up on fire and the old couple ends up dead. Faust is struck blind and tormented by the Anthropomorphic Representation of worry, while Mephistopheles summons spirits of the dead to dig Faust's grave. Hearing the sound of work, Faust believes that he is hearing workers digging a new ditch and rejoices in how his subjects' life will continue to improve; in his joy, he wishes that the moment lasts forever—which, according to his contract, is when he dies and gives his soul over to Mephistopheles. However, angels intervene at the last minute, scare away Mephistopheles and his devils, and claim Faust's soul; the reason for this is that in fact, Faust was not rejoicing at an actual earthly joy being fulfilled, but the mere idea of a perfect future world of community, thus not fitting the criteria of Faust's deal.