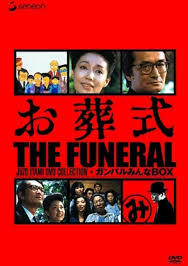 The Funeral (Ososhiki) is a 1984 Japanese film by director Juzo Itami. It was released on November 17, 1984. The Funeral is a comedy about a family preparing a traditional Japanese funeral.

The film starts with a 69-year old man named Shokichi Amamiya having a heart attack. His daughter Chizuko and her husband Wabisuke, who work as television actors, are in charge of his funeral arrangements. The problem is that neither Chizuko or Wabisuke have any experience with funerals. Comedy ensues as a host of relatives descends on Shokichi's house while Chizuko and Wabisuke struggle to deal with the elaborate rituals and traditions of Japanese wakes and funerals.

The Funeral was a hit in Japan. It won five Japanese Academy Awards and was nominated for nine.

Not to be confused with a 1996 film also called The Funeral.