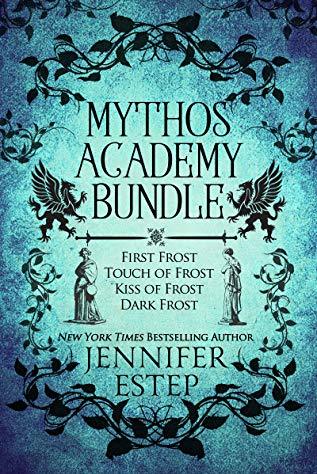 Mythos Academy is a teen fantasy adventure/romance series by Jennifer Estep. The books in the series are:

A sequel series has been started, which includes the following books:

The books are about Gwendolyn Frost, a seventeen year old girl whose gypsy heritage has granted her psychometric powers, the ability to read the history of anything - or anyone she touches. One day, she borrows a friend's hairbrush and learns that her friend's stepfather had been sexually abusing her. Once she recovers from the trauma sufficiently to be coherent, she tells what she saw to her mother, a police officer. Her mother investigates, finds enough legally admissible evidence to get a warrant, puts the man behind bars... and is killed by a drunk driver on her way home.

While still recovering from her mother's death and her inadvertent role in it, her grandmother has her transferred to Mythos Academy, a school where everybody has some sort of magical power. In addition to all the regular classes, she now also has to deal with unusual ones, like mythological history or gym classes where the teacher is more interested in instructing about swordsmanship than sportsmanship. Gwen tries to deal with her classes and her mourning while doing her best to ignore all the stuff about the evil god Loki and his Reapers of Chaos, when a series of events forces her to realize something rather unexpected.

None of the stuff covered in Myth-History is fictional.

Loki is real, and the Reapers are on the verge of freeing him from the prison the other Gods sealed him into at the end of the Chaos War.

And Gwen is the latest hereditary Champion of the Goddess Nike, who had defeated Loki in the final battle of that war.

Tropes found in this series include