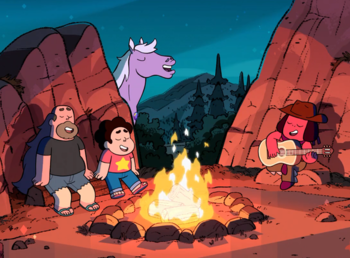 Steven and Amethyst have caught up to Ruby, eating pizza on Brooding Hill with Greg. They find that she's surprisingly cheerful, having decided that she wants some time by herself to figure things out. Greg has also taken the Pink Diamond reveal fairly calmly, noting that he himself never told Rose that he used to be Gregory DeMayo. Steven is terrified at the prospect of Ruby never going back to Sapphire, which would mean the end of Garnet, but eventually agrees to help her out. Ruby decides to use one of several comic books Greg got her as inspiration, settling on one about... a dolphin. Steven quickly suggests she try Lonesome Lasso, a Western comic, instead, and Ruby loves the idea. The next day, Ruby, with Greg, Steven and Amethyst along for the ride, heads out to try being a cowboy. Amethyst decides to play the horse, hamming it up as she shapeshifts into the form.

During the day's adventures, Ruby nearly falls into a canyon (not that this bothers her), is chased by a bull after attempting to lasso it (along with the others), and uses Finger Guns on a rattlesnake. That evening, as they camp, Ruby sings a song, "Ruby Rider", about her experiences by herself. But later that night, talking to Steven, she admits that, although she's been enjoying having her first real alone time in her entire existence, she still misses Sapphire terribly. Steven, flipping through the comic book, points out that the hero of the story, despite being called "lonesome", still has people he cares about and misses. He also has another idea, and shows Ruby something in the book that she really likes.

At the Temple, Sapphire and Pearl have been Drowning Their Sorrows in tea when Steven enters, informing Sapphire that Ruby is outside and has something to say to her. She goes out to see Ruby, riding Amethyst, still in the form of a horse. Ruby dismounts, and Amethyst heads up to the porch, startling Pearl. Sapphire goes out to meet Ruby, and the red Gem expresses the opinion that although Rose meant well in telling them that they were "the answer" all that time ago, it prevented them from learning about themselves. She then kneels and, as her hat is blown away by the wind, asks Sapphire to marry her. The seer is surprised, but Ruby explains that it will mean they can be together in a sense even when they're apart. Naturally, Sapphire says yes. As the two spend some time on the beach, with Ruby tossing Sapphire into the air, we get a look at the last page of the Lonesome Lasso issue: the main character and his Love Interest Sally May getting married.