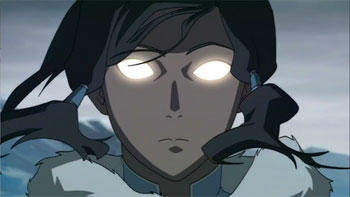 When we hit our lowest point, we are open to the greatest change.

The second episode of the one-hour season finale of The Legend of Korra. The episode, along with "Skeletons in the Closet", aired June 23, 2012.

The episode opens with two major military actions happening simultaneously: General Iroh, Bolin and Asami try to disable the Equalists' airbase, while Avatar Korra and Mako position themselves to expose Amon for the bloodbender he is. At the airbase, Naga breaks the three humans out of prison and protects Bolin from three mechs. Asami and Bolin fight Hiroshi and win. In the sky, Iroh hijacks an airplane, eventually losing the plane but manages to quite awesomely lightningbend to shoot the rest of the fleet down.

Korra and Mako, crashing an Equalist rally at the stadium, don't quite have things going their way. When they tell the truth about Amon's past, he proves his cover story right by removing his mask and revealing the (pretty horrible) facial scars he got from a firebender. Then he pulls out Tenzin, Jinora, Ikki and Meelo, who have been captured and are ready to be publicly depowered. Korra and Mako manage to free them after a short fight. To let Tenzin's family escape, Korra uses herself as a decoy to draw Amon away, and this ends pretty badly: he bloodbends her out of her hiding place and then depowers her. Avatar Korra can no longer bend fire, earth or water.

Mako snatches her up and begins to run, but as usual Amon catches up with them. Seeing Mako about to be depowered, though, Korra throws a punch, and realizes she can airbend. She knocks Amon out the window into the harbor, where a crowd of equalists has gathered. Amon loses his mask as he plunges into the water and instinctively waterbends to save himself from drowning, showing the crowd his true colors as a waterbender (the scars are revealed to be paint). He swims away and later begs Tarrlok to come with him and make a new start somewhere else, much as their father did. The two race away on a speedboat. Tarrlok's gaze falls upon a stack of electroshock gauntlets. But he doesn't leave it to chance. He unscrews the cap on the boat's fuel tank and applies the spark directly. The ensuing explosion kills them both.

At the South Pole, Katara has tried everything she can, but is unable to return Korra's ability to bend the other three elements. Despite Mako telling her he loves her, she races off to be alone. A man in Air Nomad robes approaches her, and she tells Tenzin to leave her alone... only for Aang to retort that she called him there. He reminds her that only by hitting rock bottom could she unlock her fullest potential, and with the same energybending technique he used to depower Yakone, he restores Korra's full breadth of power and brings her into the Avatar State, where she manipulates all four elements. As she fades out of the Avatar State, she notices that Mako had witnessed the event. Her confidence restored, she leaps into his embracing arms, reciprocates his earlier profession of love and then they kiss. Korra hurries to try out her new powers on Lin Beifong, restoring her ability to earthbend. The season ends on the optimistic note that though much has gone wrong, at least some of it can be fixed.