Spoilers for all Batman: Arkham Series games preceding this one will be left unmarked. You Have Been Warned! 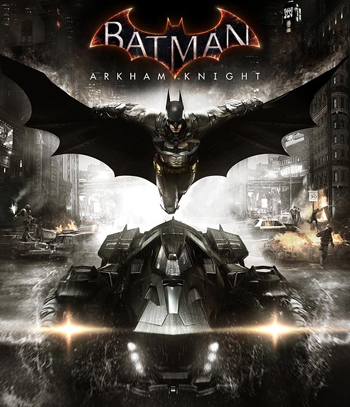 Be vengeance. Be the night. Be the Batman.
"And to Batman... I have already won. Emptied your city with a vial of toxin and a few threatening words. That's how little the safety you provided was worth. And when the dawn comes, when Gotham lies in ruin and I turn my gaze to the world beyond... The legend of the Batman will be worth nothing at all."
— Scarecrow
Advertisement:

One year after the death of The Joker (Mark Hamill) in Arkham City, crime in Gotham is at an all time low. But that all changes on Halloween, when Scarecrow (John Noble), previously thought to be dead, reunites Gotham's villains with one goal in mind: kill the Batman. Gotham is evacuated after a threat to detonate bombs filled with fear toxin across the city, and criminals run rampant through the streets. The Dark Knight (Kevin Conroy) must now fight through his rogues gallery one more time, while also facing off against a dark mirror to himself, the mysterious "Arkham Knight" (Troy Baker).

In addition to a Wide-Open Sandbox much bigger than previous games, Arkham Knight introduces three major gameplay additions to the franchise. "Fear Takedowns" allow Batman to ambush up to three enemies at once before starting a fight (and four and five with upgrades); full use of the Batmobile for navigation and combat; and a dual-play system that allows Batman to swap out for Robin, Catwoman or Nightwing at select points in the game.

Unlike the previous three games, Arkham Knight is exclusive to the PlayStation 4, Xbox One, and Windows PCs. It is the only game in the Arkham series to receive a Mature rating from the ESRB, also making it the first Batman video game to ever receive this rating. It was released on June 23, 2015 on all platforms, then taken down from Steam for a period of 4 months, until October 28th, 2015.

A Season Pass for multiple DLC packs was announced. This included pre-order DLC as Red Hood and Harley Quinn. This was followed by a Prequel set before Arkham Asylum (A Matter of Family) starring Batgirl, several challenge rooms and Batmobile race tracks. This in turn was followed by additional post-launch content, with episodes featuring other members of the Batfamily and a villains pack (The Season of Infamy) featuring Killer Croc, Mr. Freeze, Ra's al Ghul and Mad Hatter.

A macOS and Linux/ SteamOS port was also planned for release in Late-2015, and was to be released by Feral Interactive, but plans were scrapped and canned in Early 2016.

Batgirl: A Matter of Family

Robin: A Flip of a Coin

The Season of Infamy

Tie-In Comics
Gotham needs something more, something worse, to defend her. She needs a new myth, a legend more powerful than I can be right now. A legend that can only rise from the ashes of the Batman.
Feedback

Example of:
You're Insane!