Comic Book / Batman: The Doom That Came to Gotham 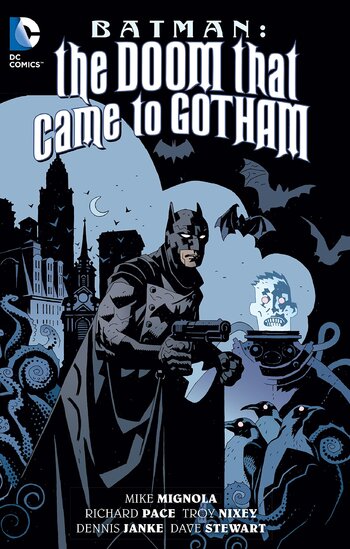 In his cave in Gotham, The Dark Knight waits, dreaming.
Advertisement:

In 1928, Bruce Wayne returns to the city of Gotham twenty years after a mad man killed his parents out in the streets. He had investigated a failed expedition into the Arctic and finds everyone had gone insane, one of the members having been transformed into something unnatural. As Batman, he grows to find that whatever horrors there were lurking exist in Gotham. He must find the cause of this outbreak of horrors before the world comes to an end.

Batman: The Doom That Came to Gotham is an Elseworld comic that reimagines Batman as the protagonist of a Cosmic Horror Story and is overall an Homage to the collective works of H. P. Lovecraft. It is written by Mike Mignola and Richard Pace, and illustrated by Troy Nixey and Dennis Janke.