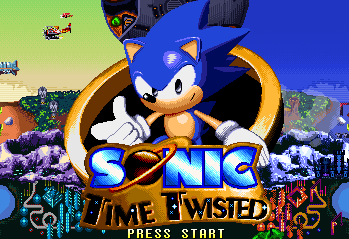 Sonic Time Twisted is a Sonic the Hedgehog PC fan game developed over the course of 12 years in GameMaker Studio by Overbound and finally released in April 2017. Its What If? premise takes place after Sonic 3 and Knuckles, with Dr. Robotnik having been killed after Sonic destroyed his escape mech at the end of that game. Sonic, Tails, and Knuckles begin cleaning up the leftovers of the late doctor's robot armies, but they soon come across Metal Sonic, who wants to employ alien technologies, the Time Stones, and the Chaos Emeralds in a plan to resurrect his master...

Gameplay is based on Sonic CD, with each zone having a Past and a Future version with different gimmicks, enemies, and hazards. Time travel is more practical: you simply run past a time travel sign to warp and you remain on that time zone even in following levels until you hit another sign. Each time zone has a set of 7 Special Stages, which are a mix of the ones from Sonic CD and Knuckles' Chaotix: you race against Metal Sonic to the end of a 3D obstacle course, avoiding enemies and jumping over pits.

You can get the game on the developer's page.

Tropes twisted, or not, in this game include: