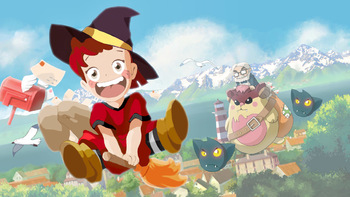 Maria in the front; Zaki, his mount Mia, and some minions in the back.

Maria the Witch is a 2016 Mobile Phone Game, which also received ports for Steam and Nintendo Switch. Perhaps the most notable thing about this game is its unusual controls; one button moves up & left, and another moves up & right, with either button leading to a loop-de-loop if held down.

The plot, brief as it may be, is that Maria is an amateur witch still learning how to master her broom. When Zaki decides to steal all of the town's mail, it is up to Maria to not only track him down, but also to collect discarded letters and deliver them to mailboxes along the way.