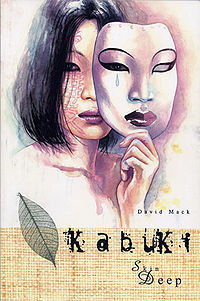 Our heroine and her mask
Advertisement:

This page is for the comic book by David Mack.

Kabuki is a comic book written and for the most part illustrated by David Mack. It features some unorthodox storytelling techniques including abstract pictures, photographs, photo-shopped photographs, crayons, sculptures, paintings, collages of textiles and flowers and an eclectic mix of pictures and words that redefine the comics medium. Mack uses different

and art styles to describe any given scene; in short, the book is something to see.

The story itself is simple enough: A deconstruction of the whole near-future-corporate-assassin-trained-from-birth-emotionless-ice-maiden-going-around-killing-people-on-the-say-so-of-a-faceless-man trope. Kabuki is one of eight women agents of an entity called Noh who sit in a room with colorful costumes and masks on talking to a couple of guys with masks on all day and then kill who they're told to kill in colorful ways all night, but then something happens. A relative of Kabuki returns to town, setting in motion events which force our hero to examine her past, and over the course of seven or so volumes we get closer and closer to Kabuki, forced inside her skin and getting to know her better than we might like. Mack's telling a deeply personal story, and even when we don't understand what it's about it's almost impossible not to care.