This page refers to the Full Metal Panic!/Oh My Goddess!/Ranma 1/2 fanfic, not to the novel series in development around the original characters from this story. 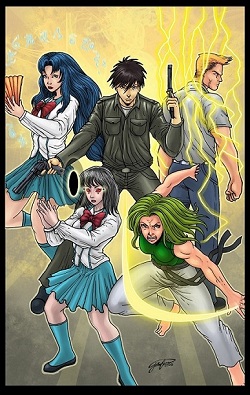 These were the characters before the plot really got moving.
"This looks like a safe neighborhood." - Ranma Satomi on arriving in the neighborhood of Jindai High.
Advertisement:

Like so many other fics by Thrythlind, this was started merely by an idle “what if” statement that consisted of “what if Ranma Saotome had children by the Gods?”. The first elements were posted in mid-August on the Maximum Adventure. The prologue, chapter one and some of chapter two were written between then and late January of 2007, after which time it sat untouched until picked up again in June of 2009, recently reaching its 48th chapter

The plot is that Zeus and Poseidon are arguing over whose bloodline is strongest by comparing their children's accomplishments. A third deity, Hecate, appeared and noted that neither could compare their bloodlines because they had not yet sired children on the same woman. She suggested a bet and offered herself to serve as a fill in for her father Hades, since he was unlikely to care about such a bet, or approve.

The object of the bet is Ranma Saotome, who ends up kidnapped from Japan and abandoned in Greece.

The story then skips seventeen years to Ranma Satomi (a European misspelling of her name that she’s adopted to avoid attention) deciding to return to Japan after raising her children for seventeen years, during which she has acted as a freelance mercenary and exorcist.

Ranma avoids Nerima, not wanting to go right to her old home just yet, and Nekomi, due to sensing something similar to her attackers there. Instead she arrives at Jindai High, her children starting school the same day as Sousuke Sagara.

Kasumi: "Hmm, I shall have to attend to figuring out what is best to serve such guests then. It would not do to dishonor her comrades by accidentally poisoning them."