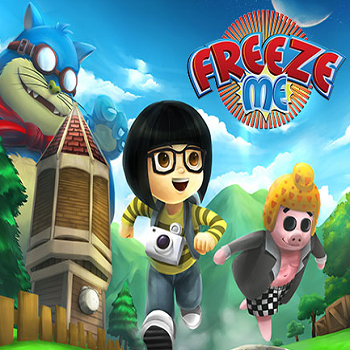 FreezeME is a 3D Collect-a-Thon Platformer by Rainy Night Creations, which deliberately throws back to earlier games in the genre, and takes particular inspiration from the 3D Super Mario Bros. games. It was released for PC through Steam on December 10th, 2015, and then ported to Wii U on February 4th, 2016, Xbox One on September 2nd, 2016 and to Playstation 4 on November 15th, 2016.
Advertisement:

One day, a little girl known only as R is out playing with her best friend M, who is a dog. However, the evil Fat the Cat seeks to create a dog-free world, and kidnaps M! But he didn't count on R having a magical camera that allows her to freeze anything she takes a picture of! Armed with the ability to stop things in time, she sets off to rescue her best friend and liberate the land from the evil Fat the Cat.

FreezeME is divided up into four worlds. The main collectibles in each world are Golden Cubes, which R has to collect to progress. Each world contains 10, at least two of which will be gotten from beating a boss and collecting 150 Red Pigcoins. Each level also contains a number of Green Pigcoins, 10 of which can be exchanged for a Golden Cube. The overworld, Hubbiton, also contains unlockable challenge levels that reward R with five Green Pigcoins each. Finally, there are a number of hidden salamanders in each world that can be photographed to gain secret unlockables.