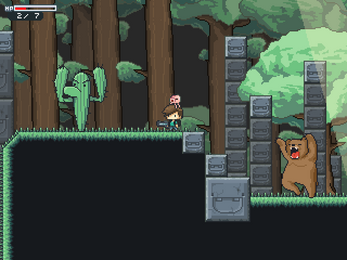 Squiddy: Aren't you the hero?
Jables: I don't know.
Squiddy: Would you like to be?
Jables: OK.
Squiddy: Let's try this again. Hellllloooo, hero!
Jables: Yo.
Advertisement:

is a freeware platform game created by Jason Boyer (with help from Ryan Pietz on the dialogue and plot, and music by Kevin "Frantic Panda" Carville) and released in 2010. It's a Metroidvania game (it plays like a less-linear Cave Story) with a surreal, self-aware sense of humor.

You play as Jables, a 15-year-old boy who wakes up one morning to find a squid perched on his head. Its name is Squiddy, and he insists that Jables is the hero. So Jables sets off to go exploring and a-hero-ing.

In spite of the game's short length (Boyers estimates that it has 30-60 minutes of gameplay), it's surprisingly Troperiffic.

Has nothing to do with Jack Black.

Press [X] to become the tropes!