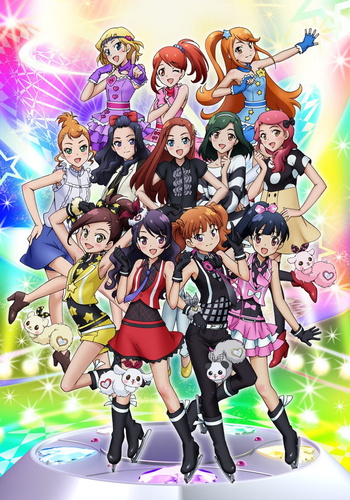 A new system called "Prism Acts" is featured in the series, where Prism Stars can put on a special acting skit as a finishing move.note (As the anime is a tie-in to the arcade game, a Prism Act is basically a bonus round that lets you score more points at the end of the song.) In addition, Fan Calls have replaced the carat (points) system, where people can send votes that are separated into three categories: Cute (pink), Cool (blue), and Fun (yellow).note (The basis of this is that in the arcade game, you can now vote on other players' outfits using Fan Calls after each round.)

In real life, Dear My Future was also used as a vehicle to promote the music groups Prizmmy and Puretty, who the characters are based on. Unlike Aurora Dream, Dear My Future was more global-focused, as the involvement of SBS Viacom onto the production committee led to the series to be marketed in South Korea as well. On top of that, Avex was not shy about promoting Prizmmy and some of their other music acts through the series, and as a result, the series feels more Merchandise-Driven than its predecessor. Unfortunately, Dear My Future not only debuted around the time Japan lost interest in South Korean entertainment, but the series didn't do very well in both countries. This led to a Retool of the Pretty Rhythm series with its third season, Pretty Rhythm: Rainbow Live, which took place in a different continuity.