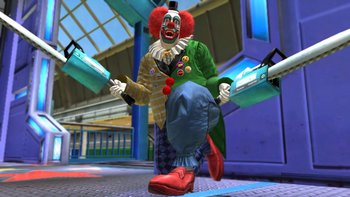 "Everyone used to laugh at me..."
Dead Rising lulls you into a false sense of security with its over-the-top premise. You are a reporter (he's "covered wars, you know") who gets stuck in a shopping mall full of zombies in search of the ultimate scoop. Sounds safe, right?
Advertisement: