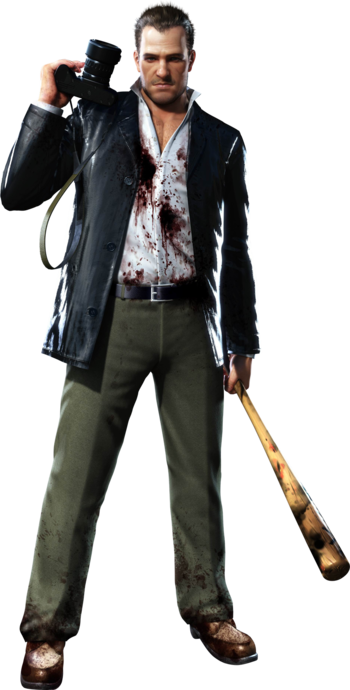 "It's Frank. Frank West. Remember that name, 'cause the whole world's gonna know it in three days... when I get the scoop."

The protagonist. Upon hearing that something big was going down in the town of Willamette, Frank charters a helicopter in order to investigate and leave with the "scoop of a lifetime". He tells the pilot to drop him off on the roof of the Willamette Parkview Mall, and return for him in 3 days. Frank proves himself to be incredibly competent fighter and photographer, and his determination in getting his story allows many dark truths to come to light.

After the events of the Willamette Incident, he proceeds to become a celebrity, but squanders it all and alienates the public. He attempts to 'get back in the game' by investigating the company Phenotrans in Dead Rising 2: Case West. He also is the star of the What If? story Dead Rising 2: Off the Record. He returns as the protagonist of Dead Rising 4, once again investigating an outbreak in Willamette. 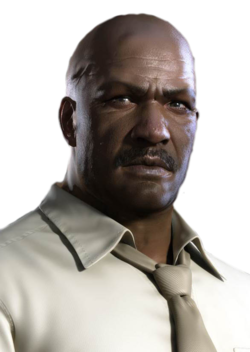 "I just want you to appreciate the situation."

A DHS agent who was assigned to the investigation of the Willamette incident alongside fellow agent Jessica McCarney. At first, he is distrustful of Frank and expresses his displeasure of his trade. But after fighting alongside him against Carlito, fetching him medicine from the Supermarket, and ensuring a helicopter ride out of the mall, Brad comes to trust Frank as a formidable ally.

Level-headed, Brad assumes responsibility over re-stocking the security room with supplies, and looking after his younger colleague. 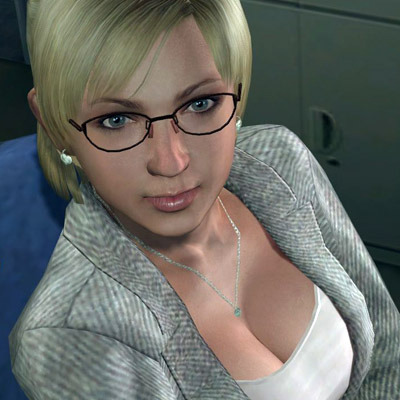 "Can't blame her for running away from a guy with your looks."

A DHS agent who accompanies Brad to the mall. She initially goes to assist Brad, but due to a sprained ankle, she is forced to leave saving him up to Frank. Like Brad, she is at first distrustful of Frank due to being part of the press and tells him the minimum amount of information, such as her name and Brad's; however, she grows to trust him. While she does spend most of the game holed up in the saferoom, she still manages to provide help from time to time and does have a lot of significance to the plot. Unfortunately, near the end of the game, she turns into a zombie after succumbing to a previous attack from Dr. Barnaby.

An aged mall employee who serves as Mission Control for most of the game. Despite his prominent role in gameplay, he is silent during cutscenes. 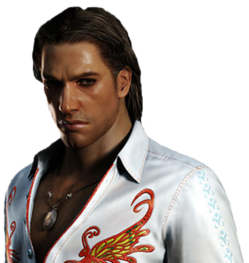 A mysterious man, first met on the heliport of the mall. After numerous run-ins with Frank and Brad, it is revealed that he orchestrated the Willamette outbreak as revenge for the US government's cover-up of a research facility in his home town of Santa Cabeza. A dangerous man with many back-up plans, he eventually dies at the hands of a psychopath butcher.

With access to heavy firepower and a radio jammer, Carlito is the most frequent boss you face in-game. 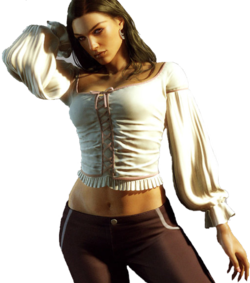 "Fine. I'll explain why all of this is your fault."

A mysterious woman first encountered in the Entrance Plaza before the zombies break in. It turns out that she's Carlito's little sister, and co-conspirator in the Willamette Outbreak. After a few encounters with Frank, she agrees to help him get his story by asking Carlito to be interviewed by him. He responds by shooting Isabela in a fit of rage, forcing her to seek refuge with the Security Room survivors. Turns out that she worked as a pharmacist at the Santa Cabeza research facility, giving her thorough knowledge of the zombies. 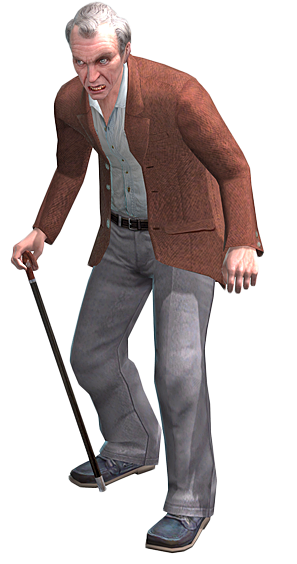 "The research was absolutely necessary! I haven't done anything wrong!"

An old man who's first encountered in Entrance Plaza, Barnaby's research led directly to the Willamette incident. The subsequent 15 years of occasional outbreaks, and the million-plus who died in them, are all on him, but he didn't live to see it.

His findings and research come back up again later, as part of the plot of Dead Rising 4.

"I feel like I'm runnin' a taxi service here."

The helicopter pilot Frank hired to bring him into Willamette and pick him up in three days. It's this helicopter that the survivors are counting on to get everyone out of the mall. He seems very uncaring and flippant, even constantly calling Frank "Fred", but he does stick to his word and arrives at noon three days later. As he's flying to the mall, he's eaten by a zombie and crashes his helicopter into the clock tower. 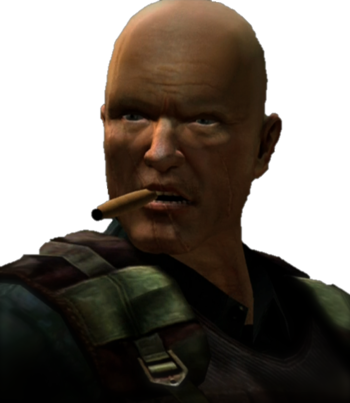 "I'd say this mission isn't quite over yet."

The sadistic U.S. Special Forces officer responsible for "mopping up" the Willamette outbreak. It turns out he was also the overseer of the equally brutal Santa Cabeza clean-up operation, and its subsequent cover-up. 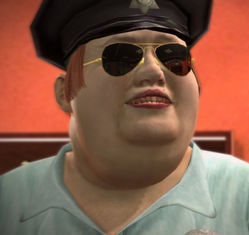 "Let's see just how shameless you are, you dirty little skank."

A fat female cop who has captured four women that she tortures and degrades inside a clothing shop at Wonderland Plaza. She uses her captives to lure people into the store to kill them. 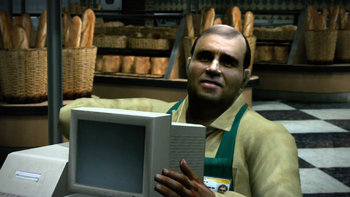 The insane manager of Seon's Food 'n Stuff, the mall's grocery store. He is willing to use any means to protect his store from intruders... even lethal force. 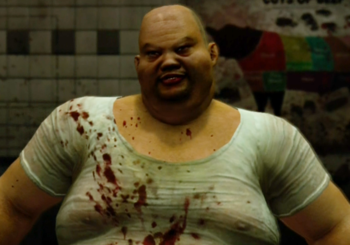 "Zombies are no good! I can't serve my customers spoiled meat like that."

An obese butcher who thinks the zombies are "spoiled meat" and people are "fresh meat". He ends up inflicting fatal wounds on Carlito by attaching him to a meat hook. 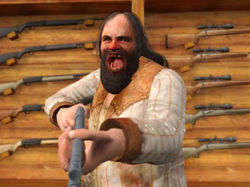 "I trust those damn zombies about as far as I can throw 'em, but I trust people even less!"

A gun shop owner with severe paranoia and trust issues. Instead of aiding the survivors by giving them guns, he shoots at anyone who gets too close to his store, undead or alive. 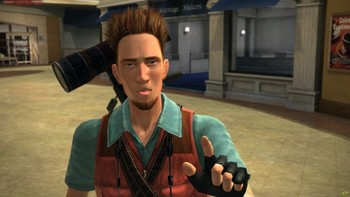 "Looks like you're a pro after all, ya know."

Another photographer stuck inside the mall, and a rival to Frank. After being bested by Frank in two impromptu photography contests, his jealousy and need to outdo Frank causes him to snap and decide to try to capture the exact moment when a human becomes a zombie on film by infecting a captured survivor. 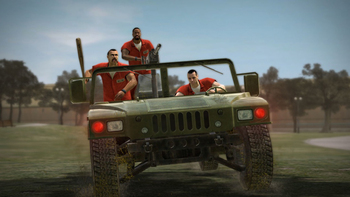 From left to right: Miguel, Reginald, Sam
"Alright! Looks like we found our next contestants!"
"I'm gonna take out that dude, an' snatch his old lady!"
"Here we go!"

A trio of escaped criminals who have somehow gotten a hold of a vehicle with a mounted machine gun. Rather than trying to survive or escape the mall, all they seem to care about is having fun while they can. Unfortunately, their definition of fun seems to be to assault/kill anyone they come across. 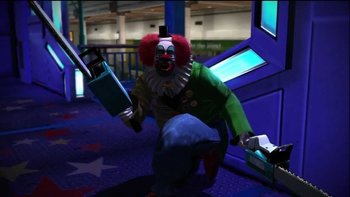 "Everyone used to laugh at me... I was a walking punchline. But not anymore."

A clown who was hired to entertain the people visiting the mall and went insane with grief when the zombies killed his audience. Frank finds him at the Space Rider roller coaster's controls, keeping the ride going to distract the zombies with its noise. Wields two chainsaws and uses various tricks in combat. 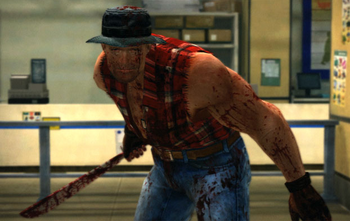 A Vietnam veteran who is undergoing flashbacks after seeing his granddaughter get killed by the zombies. Lost in the war memories, he's been cornering victims at a hardware store and stringing their bodies up, leaving them headless and bleeding. Frank has to investigate the scene and confront him in order to make sure no innocent people fall under his delusion. 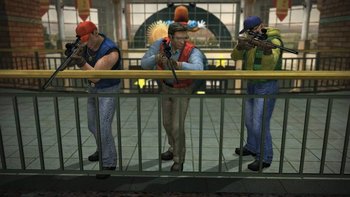 From left to right: Jack, Roger, Thomas
Thomas: "But, daddy, he ain't no zombie. He's just a man!"
Roger: "Thomas! We're doin' this to survive. You know that."
Jack: "Using a firearm for self defense is our god-given right as Americans, Thomas."

A patriarch (Roger) and his two sons (Jack and Thomas), who have cooped up at a walkway on the Entrance Plaza. Hunting enthusiasts and survivalists, the trio uses sniper rifles to shoot anything that comes into their territory, zombies and survivors alike. Thomas, the youngest son, is the most reluctant to do so, but still follows his dad and older brother into battle. 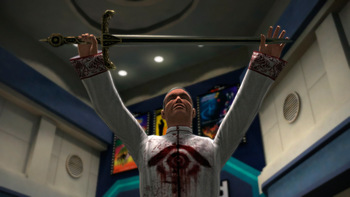 "Spill his blood! The blood of the heretic!"

The leader of the "True Eye" cult, who believes that spilling the blood of the "nonbelievers" will stop the zombies, hounding up survivors for sacrificial murders. He disappears after his introduction cutscene, but can later be found at Colby's Movieland. 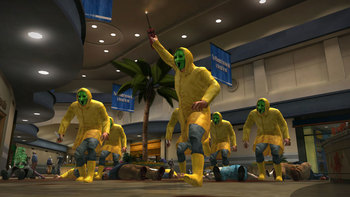 A cult led by Sean Keanan, operating in Colby's Movieland. They re-emerge in Willamette after the 2022 outbreak. 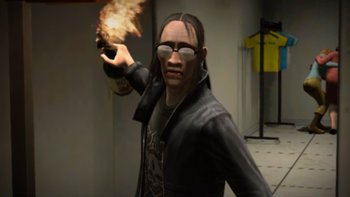 "I suppose you came here to l-l-laugh at me, too!"

A young pyromaniac who uses Molotov cocktails when fighting. If rescued after he sets himself on fire, he becomes a valuable ally. 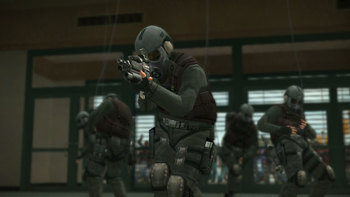 A special forces unit manned by Brock Mason sent to clean up (read: cover up) the outbreak. They ruthlessly and efficiently kill any and all zombies and survivors alike left in the mall, and plan on doing the same to Frank. 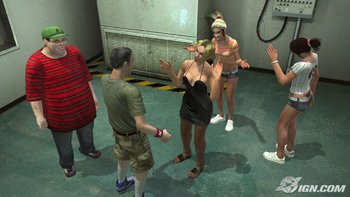 Citizens of Willamette who were not initially killed or rendered undead by the zombie outbreak. Many survivors can be escorted safely to the Security Room, and will often provide Frank with competent cover if given firearms or other weapons; others may be injured, cowardly, traumatized, hostages, or even drunk, requiring Frank to lead them directly to the exit point and possibly rendering him unable to use his weapons. 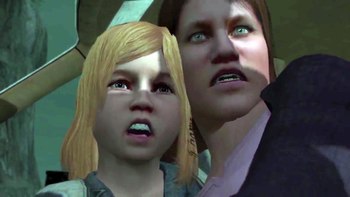 A mother and her daughter attempting to escape from Willamette on the road late at night. They crash into a truck and get harassed by a stray zombie immediately after. Upon trying to escape again, they find their car out of gas, right when a huge horde closes in on their car. It's unknown what became of them afterwards..