Fanfic / What If Raditz Turned Good? 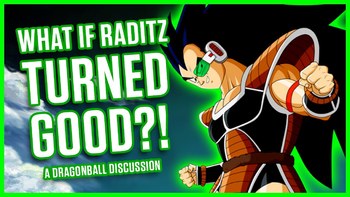 So many things that could've been, so many things I haven't seen!
"What if this first fight in Z ended rather differently?"
—MasakoX
Advertisement:

What If Raditz Turned Good? is a Dragon Ball What If? fanfic by Lawrence Simpson aka MasakoX of Team Four Star fame as part of his Dragon Ball Discussion series of Youtube videos. This particular topic started on April 17th, 2017.

As the title suggests, he explores his interpretation of an alternate version of the story where Raditz actually survives his first encounter with Goku and Piccolo and ultimately joins forces with them and the other Z-Warriors, through the incoming threats of the series. As of the end of 2019, the story has covered all of Dragon Ball Z (with two separate videos covering the changes to its 13 movies), Dragon Ball Super (including Dragon Ball Super: Broly), and most of Dragon Ball GT. In early 2019, Masako decided to Retcon the Future Trunks timeline, feeling that he'd missed an opportunity in the original videos by leaving it the same as in the manga.

The topic proved immensely popular with Dragon Ball fans, who likewise helped with input, so much that not only did they provide fan work of Raditz's powered up forms as well as images of his daughter, Ranch, but likewise have a Deviantart page dedicated to it.

It was later announced there will be a audio drama for it developed by Masako, with it going under the title Dragon Ball R&R note Raditz and Ranch. It takes place between the Buu saga and the Battle of the Gods saga in Super.

What If Raditz Turned Good? has the following tropes: