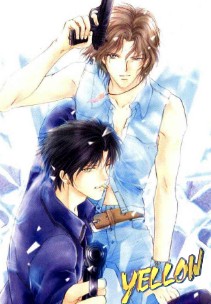 Green is "forward," and red is "stop." Yellow is "risky." If you dare, go forward at your own risk.
Advertisement:

Yellow is a Yaoi series written and illustrated by Makoto Tateno. Taki and Goh are two young men who work together as drug snatchers for the police. Taking only code "yellow" jobs, both the risk and the pay is high. Despite their excellent teamwork and skill at carrying out these heists, things begin to get increasingly dangerous for them when they start to find their targets dead before they reach the goods. As it turns out, Taki's Dark and Troubled Past has come back to haunt them both.

Since it is a Boys' Love series, Goh naturally has far more than platonic feelings for his partner Taki, who is less than amused by Goh's advances. Initially. It's been compared to Sanami Matoh's FAKE, but is faster-paced and somewhat more explicit.