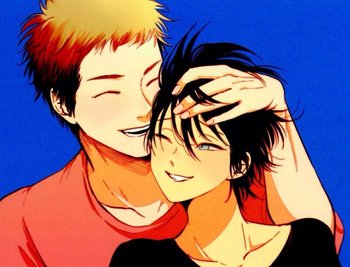 YataMomo (sometimes stylized as "Yatamomo") is a Yaoi Genre manga by Harada. It was serialized in Qpa from 2013 to 2017 for 20 chapters, which were compiled into three volumes.

Momo is a good-for-nothing bum, Yata is a reliable young man. During their first meeting in a public bathroom, Momo takes advantage of Yata's kindness and comes rolling into his home. While spending time with him, little by little, Momo changes.