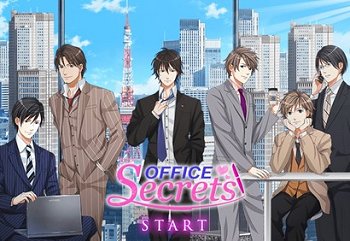 Left to right: Ryoma, Mr. Goda, Toranosuke, Junya, Shota, and Shingo
Is it okay to fall in love with a co-worker?
Advertisement:

Office Secrets is a Romance Game Visual Novel by Voltage, Inc. for iOS and Android devices. A Westernized adaptation has also been released by Voltage Entertainment USA under the title Intimate Business.

The heroine is an employee of Infinite, a well-known clothing company, who suddenly receives notification that she's being transferred to a new department. All of the other people selected for the new department are top employees, so the pressure is on the protagonist to pull her weight and contribute to the success of the company's newest project. Matters only get more complicated when she inevitably ends up on increasingly intimate terms with one of her co-workers, even though workplace romances are strictly against company regulations.