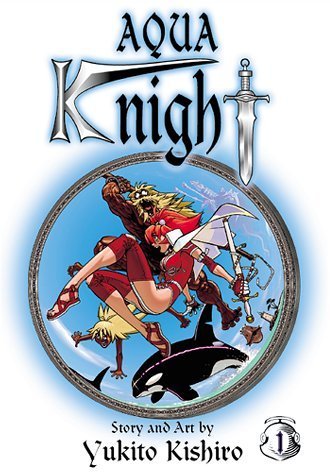 Brief (three volumes so far) manga series by Kishiro Yukito, the creator of Battle Angel Alita, following the adventures of a young knight-in-training on the watery world of Marmundo.

While traveling on her quest to become a true knight, young Ruliya is caught in a storm and sinks to the bottom of the sea. Her scuba-like armor keeps her alive, but the buffetting leaves her unconscious. Luckily she sinks near the shores of Lighthouse Island, home to Arrabarus and his young son Ashika. The island takes its name from the lighthouse powered by a strange, glowing sphere which may or may not be the spirit of Niselle, Arrabarus' dead wife.

Shortly after Ruilya's arrival, more visitors come to the island: Mad Scientist Alcantara and his minions Zycrow and Zykey. Believing the sphere to be the final ingredient for the Elixir of Life, Alcantara steals it, destroying the lighthouse and badly wounding Arrabarus. The intruders set off, with Ashika captive aboard their flying fortress and Ruliya following close behind. On her quest to rescue Ashika, she crosses paths (and swords) with various monsters and demons, and makes a rather... unusual friend.

First published in 1998, Aqua Knight is currently "on hiatus" according to Kishiro. Originally the story was a way for him to take a break from writing Battle Angel Alita; when he continued that series with the Last Order books, Aqua Knight was set aside again. A lighthearted adventure with just enough drama to keep things interesting, the story is wholly different from the dense cyberpunk world of Alita and Ido, but no less enjoyable for it.