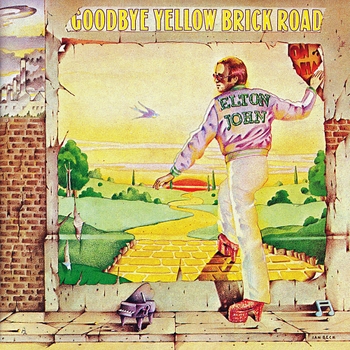 You can't plant me in your penthouse
I'm going back to my plough
Hey kids shake it loose together
The spotlight's hittin' something that's been known to change the weather
We'll kill the fatted calf tonight so stick around
You're gonna hear electric music solid walls of sound
—"Bennie and the Jets"
Advertisement:

Elton originally wanted to produce the album in Jamaica, but logistics issues surrounding the world championship boxing match between Joe Frazier and George Foreman stymied that. So he settled for returning to Château d'Hérouville in France, where he had produced Honky Château and Don't Shoot Me I'm Only the Piano Player. Once settled, it took barely more than two weeks to produce.

It wasn't intended to be a double album, but Elton and writing partner Bernie Taupin wrote enough good songs to do so; they wrote 22 songs, and used 18 of them.

Four singles were released from the album: "Saturday Night's Alright for Fighting", the Title Track, "Bennie and the Jets", and "Candle in the Wind". "Bennie" would be his second #1 on the Billboard Hot 100, while "Goodbye Yellow Brick Road" would hit #2; both would go double-Platinum as singles. All four were hits in the UK (respectively, #7, #6, #37, and #11).note "Candle in the Wind" did not chart at all in the United States, and wouldn't until a live version hit #6 on the Billboard Hot 100 in 1987. Another version, recorded in 1997 as a tribute to the recently-deceased Princess Diana, went on to sell 11 million copies (in the United States alone) and become a multi-week No. 1 hit that fall.

When the album was first pressed to CD, it was pressed to a single disc, as the combined albums could fit in the "Red Book" CD-DA format. Remasters in 1992 and 1995 were also pressed to a single CD. A 30th anniversary edition in 2003 split the album back into its original two-disc format, with the second disc including three B-sides and an acoustic version of "Candle in the Wind".

Two versions were made for a 40th anniversary re-release in 2014, both with the remastered original single CD as the first disc. The deluxe edition included a new second disc with some covers (which feature the likes of Ed Sheeran, Wale, and Fall Out Boy, among others) and a selection of recordings from a concert at Hammersmith Odeon in 1973. The super deluxe edition had a different second disc that had the covers along with the previous bonus tracks and other older Elton John songs, two more discs with a wider selection of songs from the Hammersmith Odeon concert, and a DVD featuring an abridged documentary with Elton John and Bernie Taupin originally filmed in 1973.

A documentary about the creative process behind the making of the album was featured in the TV series Classic Albums.

"Saturday night's all right for troping, get a little action in"