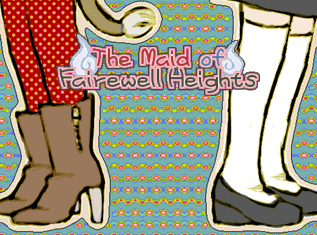 The Maid Of Fairewell Heights is a freeware RPG Maker 2000 game made in Japanese by Nora and translated to English by Memories of Fear.
Advertisement:

In order to financially support her beloved darling, a high schooler named Marshmallow Holly must clear away the dust and solve the mystery behind the haunted apartment complex of Fairewell Heights to collect her paycheck as a part time maid. There are rooms where love is covered in dust. Places where ghosts and monsters shop. Marshmallow must solve the mystery behind each of these rooms! A comedy game packed with minigames and a touching story! It is a cleaning adventure game that will sweep you away!

A translated version can be downloaded from RPG Maker.net here