Characters from the manga Delicious in Dungeon. 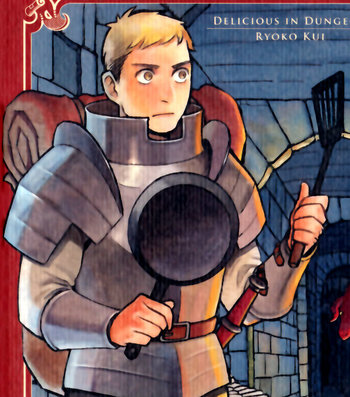 The leader of the party, and an experienced human fighter. He is extremely knowledgeable in monsters and the like, which in turn has fueled a lifelong desire to... eat them. Which is exactly what he gets a chance to do due to the critical circumstances at hand. 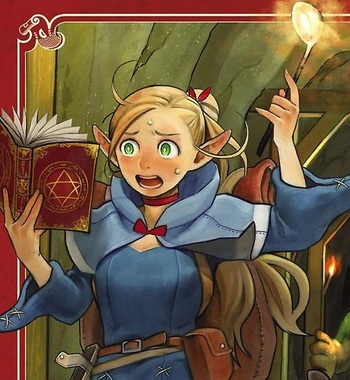 A powerful, albeit skittish, elven mage. She is a very close friend of Falin and insists on following Laios into the dungeon to save her. Unfortunately, she isn't as... thrilled to eat abominations from the depths of the underground. 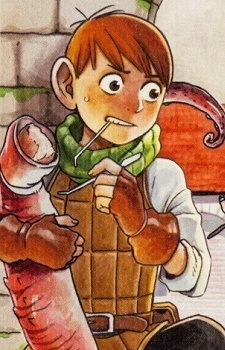 A halfling rogue and master lockpicker with very advanced knowledge of traps and their mechanisms. While he says he prefers not to mix his private life with his work, he is a good friend of Laios and follows him to rescue Falin. He is not as enthusiastic about eating monsters, and might be grossed out over some species, but usually agrees and enjoys eating the well made monster dishes. 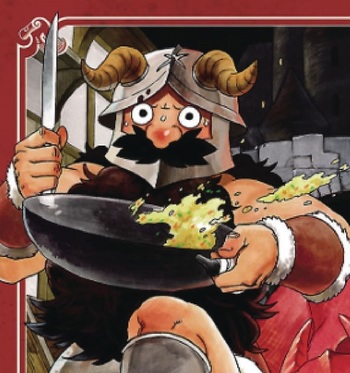 A weird but friendly dwarf encountered early on the first level of the dungeon. He is a veteran in the art of consuming and cooking monsters, but also has a deep sense of responsibility with the ecosystem and the well-being of the people. He is the main enabler of Laios's monster obsession and usually cooks for the party, being a master chef. 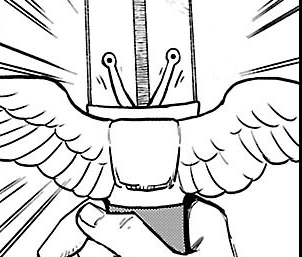 A living armor mollusc monster who lives in the handle of Laios's sword. It came from the "chief" living armor, which had laid the eggs for their group. It rattles when dangerous monsters are near. 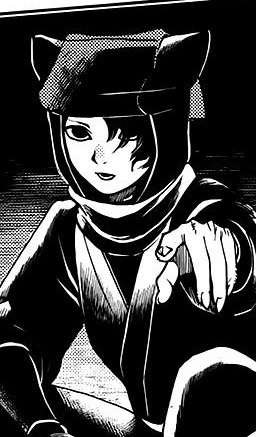 A cat beastkin and former member of Shuro's party who later joins Team Touden. She hopes travelling with Team Touden will help her find a cure for the curse that has made her into a chimera. Standoffish and self-centered at first, she soon thaws and begins to bond with the other members of the party. 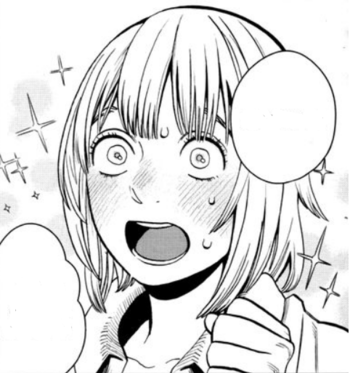 Laios's younger sister, she sacrificed herself to save the rest of the party and was subsequently eaten by the Red Dragon, kickstarting the plot. Before being eaten, she was a skilled mage and cleric and Team Touden's main healer. She and Laios were very close and she was also close to Marcille, who she attended school with. 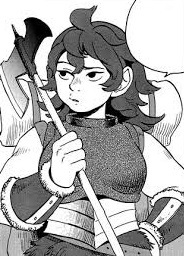 A dwarf who left Laios's party and opted out of rescuing Falin due to said party's lack of resources, Namari can still be found in and out of the dungeon as a recruit of the Tansus's. 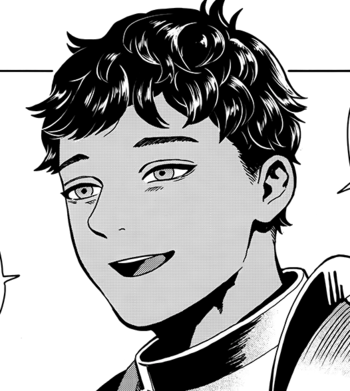 A human warrior and leader of his own team. Kabru is very skilled with people but is not as strong in combat as the likes of Laios or Shuro. He and his party have a bad habit of getting wiped out. 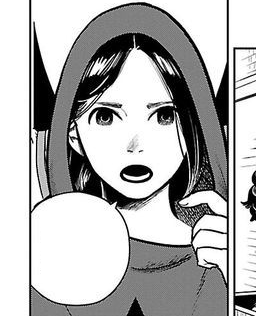 A human mage and member of Kabru's party. She seems to be the closest to him, though the two bicker a lot.

A dwarven member of Kabru's party. She fights with an axe.
Holm

A halfling member of Kabru's team. He is the employer of Kuro.
Kuro

A kobold member of Kabru's party who resembles a shiba inu. He is Mikbell's employee, though he only seems to pay him in food. Despite this, he seems loyal to him rather than Kabru.

A gnomish scholar and mage. He works for the lord by studying the magic of the dungeon as well as acting as his advisor. He does not want the dungeon to fall back into elvish hands.
Mrs. Tansu

Mr. Tansu's wife who accompanies him on his Dungeon Crawling and business trips.
Kiki

The Tansus' adopted human daughter. She goes with her parents when they go Dungeon Crawling. Kaka is her twin brother.
Kaka

The Tansus' adopted human son. He goes with his parents when they go Dungeon Crawling. Kiki is his twin sister. 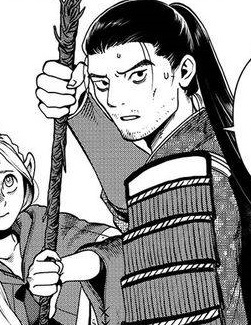 A swordsman from the East who left Laios's party to muster up his own entourage to save Falin. He comes from a noble family. He had fallen in love with Falin and proposed to her before she was eaten by the Red Dragon. She had yet to give him an answer, saying she needed more time to think it over. 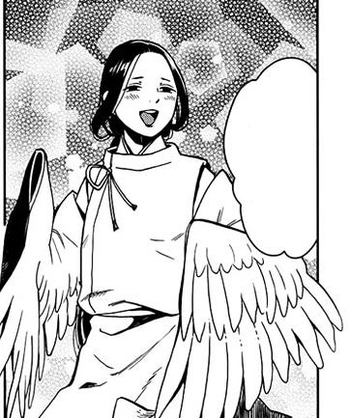 One of Shuro's retainers. She raised him from a young boy and cares deeply for his wellbeing.
Tade 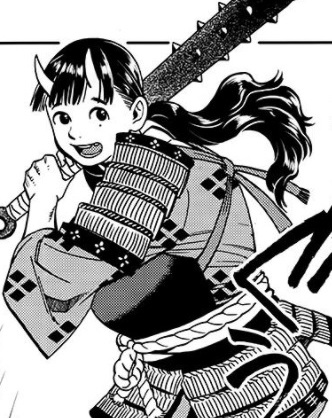 One of Shuro's retainers. She is a sweet if simple seeming woman of the Ogre race.

One of Shuro's retainers. She appears to be a human ninja.
Benichidori

One of Shuro's retainers. She appears to be a human ninja.

The Lord of the Island

The Lord of the Island

The human lord of the Island. After the dungeon was discovered, he became very wealthy. His people don't seem to have much faith in his political abilities. 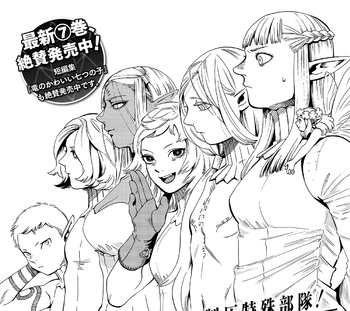 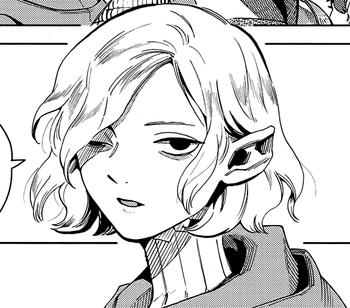 Captain of the Canaries. A strange, stoic man with no sense of direction and powerful teleportation magic. 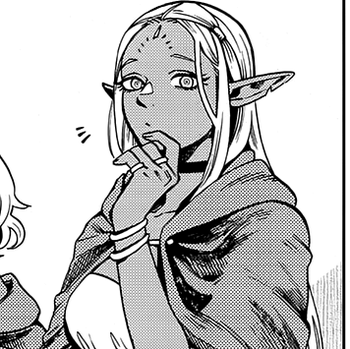 The second in command of the Canaries, and responsible for taking care of Mithrun's needs. A beautiful and reliable woman, she is also a criminal of the group. 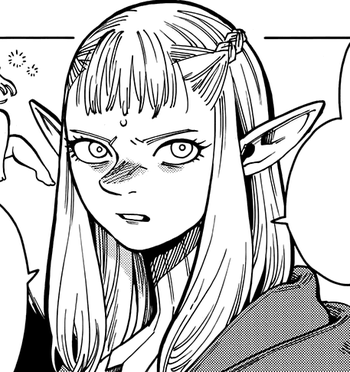 One of the noble elves to be a member of the canaries. Pattadol is a mage with the power to communicate with others through pixie companions and summon barriers.

Another criminal member of the canaries. A good-looking man with no shirt and marks all over his body. 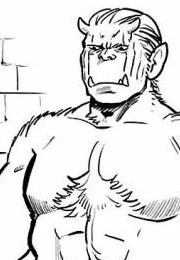 The chief of a band of orcs who live in the dungeon.

Zon's young son. He lives in the orc village in the dungeon.

A captain of a band of orcs from their dungeon village. She is Zon's little sister. 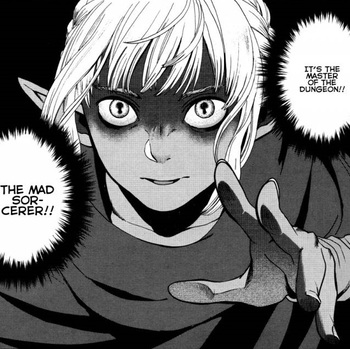 A magician of legend, stated to be the one who sunk the entire kingdom into what it is now the dungeon. The legend has it that whoever defeats her will have the underground kingdom as a reward. Long thought to be a myth, the Lunatic Magician has seemingly resurfaced, stirring dungeon denizens and local overground population alike.

The late king of the Golden Kingdom. He appeared at the mouth of the dungeon and promised his kingdom to anyone who could defeat the Lunatic Magician before crumbling into dust, kicking off the craze for Dungeon Crawling on the Island. He and the Magician were raised together from childhood. After the Sorcerer cursed his people with immortality, he escaped and somehow managed to make it to the surface without losing his mind and becoming a wandering spirit.
Yaado 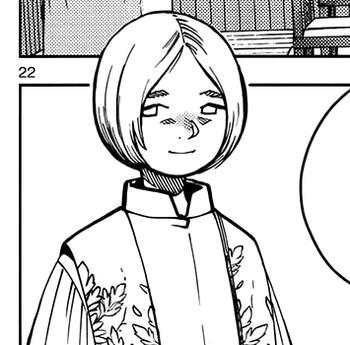 The grandson of King Delgal and current ruler of the Golden Kingdom. Like the rest of his people, Yaado was cursed with immortality by the Lunatic Magician.