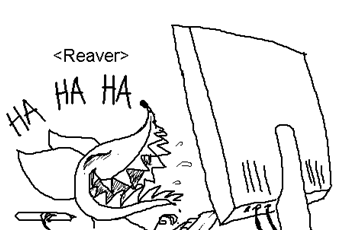 Reaver is best known for being the author of Rudy Mann Quest on /tg/, and later Mudy Quest, a quest that went on for 30-some chapters, and was well known for its update speed and art quality. Mudy Quest never reached a conclusion, and was abandoned after a failed revival attempt. After Mudy Quest, Reaver began working on a series of short quests with various permutations of a romantic theme. More recently Reaver has collaborated with Weaver on Knight Blades, a crossover with Dive Quest. In between Reaver has done several one-shots or failed projects.

Reaver has gained a bad reputation from his trolling in Mudy Quest; switching focus to romance, starting then deleting failed projects, stubborn and chaotic personality, and leaving Questden when conflicts arise between him and outspoken members of the community.

He is a close friend of Weaver, who often has made him gay. Reaver is also of the Dutch nationality.

Reaver and Weaver cannot be boyfriend/girlfriend for contractual reasons.

For a while Reaver had seemingly disappeared from Questden, reportedly severing ties with the community for good. Again. He created a sort of splinter-chan that mostly languishes, full of his random drawings or his exploits in Fallout 3. It is also hosted by Dylan. Reaver stated that he probably will not ever update or create a quest again, though this statement was dispelled upon the creation of The Romanticar Redemption.

Common tropes in Reaver's works include

Tropes that apply to Reaver, himself