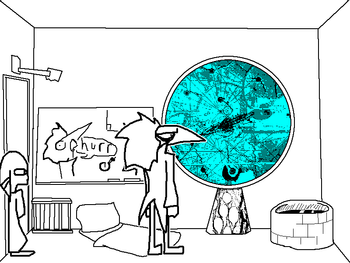 When I was very young, I asked my mother what I would have grown up to be, if I were not the Prince.
She told me, "Muschio. Whatever you desire, that you shall have tenfold. If you want to be a soldier, you will become a general. If you want to be a monk, you shall become pope."
I wanted to be a villain.
And I do not intend to stop until I have become the Devil.
Advertisement:

An imageboard-based RPG styled as a text adventure, similar in style and pace to Ruby Quest (which was the genre codifier of imageboard RPGs, if not the original). Both were created and run by a man (or little brown girl?) who goes by the name "Weaver".

It starts off with a Volto ex-prince named Muschio Malto going on a "dive" in Red Fang's Dungeon. He ultimately succeeds in killing him and claiming Fang's dungeon for himself, using it as his base of operations as he strives to complete his goal of becoming the greatest villain the world has ever known.

The chapters can be easily accessed here

. It shares a universe with Knight Blades.

There is also a flash version in progress, which can be found here