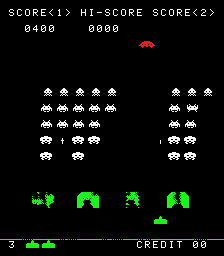 The Trope Maker that spawned a thousand other Shoot 'Em Up games, Taito's Space Invaders debuted in 1978. Although Pong had started the industry, this game revolutionized it, virtually launching The Golden Age of Video Games, establishing or codifying many tropes used in later games, such as Video-Game Lives, progressive difficulty, and a separate score counter for high scores.

Essentially, it is a shooting gallery game in which the objects in the gallery shoot back. The player controls a planetary defense laser cannon that can move and hide behind shields, and must confront a moving (and shooting) phalanx of Big Creepy-Crawlies who are attempting to invade the earth.

The game was so popular in Japan that the home version was largely responsible for the runaway success of the Atari VCS (later 2600) home console system. It also spawned the medical term "Space Invaders wrist". In United States arcades, it was the first video game to out-gross any and all Pinball machines (the top selling arcade game the year before had been Bally's Evel Knievel pinball). It was the first game in which play could last an open-ended amount of time, given sufficient skill, rather than being timed to a finite clock, and it immediately spawned a host of equally classic imitators, such as Galaxian, Gorf, and the entire top-scrolling rail shooter genre.

2002 saw an ill-fated attempt to updated the franchise, with a Gamecube/Playstation 2 game called "Space Raiders" released that took the familiar gameplay of the original, but set it on the streets of Earth, with the ships of the original series replaced with large bugs. The game was a critical and commercial flop, in particular for its bizarre attempt to update the story and setting. But then, in 2008, Taito released Space Invaders Extreme for Nintendo DS, PSP and Xbox 360 as part of the 30th Anniversary. The game turns into a fast paced shooting game, omitting barriers, but adding new varieties of invaders with various weapons and shields, and, most importantly, a complex combo system that rewards players with Power Ups, Bonus Stages and One Ups. A sequel was released for the DS in 2009 featuring even faster gameplay. Additionally, Taito also released Space Invaders Get Even for WiiWare, where the invaders, rendered in pixelated 2D in a 3D environment, become Villain Protagonists and attack Earth's cities.

In 2009, Taito graced the iPhone with Space Invaders Infinity Gene. The game begins with the original classic gameplay, then the infinity gene takes over and the game gradually evolves into a modern Shoot 'Em Up, as the player gains selectable ships, powerups, and an unrestricted range of movement, while the Invaders themselves enlist large ships, fleets, armadas, and bosses to take you on. There's also the added threat of terrain Collision Damage. You can also load up your favorite music to generate custom levels, similar to Audiosurf. The game gained critical praise, and was later updated to include achievements. It has been ported to the Play Station Network and Xbox LIVE Arcade, and befitting its evolution theme, it has addressed

There was also a less-well-known, though quite good fun, version

released by Activision in 1999. It would have been In Name Only but for a very similar gameplay mechanic (most of the time, anyway; it had boss monsters, powerups, and a few levels which were more akin to puzzles than straight shooting galleries). It also contained an unlockable version of the original game.

"Space Invaders" was at one point used by many non-gamers (in Small Reference Pools style) as a generic term for any game/console, as with "Atari" and "Nintendo" later on, a testament to the game's cultural impact. There are also many references and ShoutOuts in other media: for example, the Invaders show up (randomly) as Mooks in Battletoads` infamous Turbo Tunnel Level, and Terry Pratchett in his novel Only You Can Save Mankind (which is about a contemporary 90s space shooter turning out to be taking place in another dimension) has a wrecked Space Invader ship encountered at one point, suggesting that all space shooters take place in the same dimension and the Space Invaders, from the 1970s, were the first wave of aliens.

Not to be confused with Spaced Invaders.

Games in the Series
The following games were released in the arcade first unless otherwise noted.

Space Invaders has examples of:

You made it out this time, but this isn't the end! IT'S INDEX TIME!

Alternative Title(s): Space Invaders Get Even