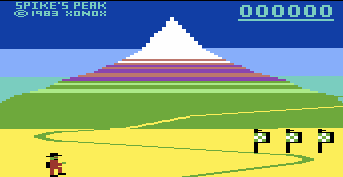 Spike's Peak is a Platform Game by XONOX, released in 1983 for the Atari 2600 and VIC-20 as part of their "double-ender" series of two-game cartridges, and in 1984 for the Commodore 64. Written by Lawrence Holland, who would go on to create X-Wing.
Advertisement:

You play Spike, out to climb a mountain. First, you walk through the Meadows, jumping over bears and muddy waterfalls, and hiding from eagles by ducking into caves. Then you climb up the Rocky Ledge, dodging rockslides and a boulder that flies back and forth across the screen. Then you walk or climb through the Ice Cap, dodging avalanches and the Abominable Snowman. Finally, you walk to the peak and plant your flag.

Along the way, you score points by reaching higher altitudes, collecting gold and ice diamonds, and killing the Snowman with your ice pick. Getting hit by rocks or avalanches can take away points. Every hundred thousand points, you get an extra life, for a maximum of three.