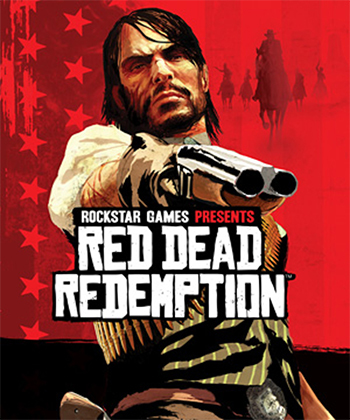 "I left the gang when the gang left me..."
"I rode in a gang. We robbed trains, banks, held people ransom. We killed people we didn't like. Bill Williamson was in that gang. If I don't capture my former brother-in-arms, great harm will befall my family."
— John Marston
Advertisement:

Red Dead Redemption is a Wide-Open Sandbox spiritual sequel to Red Dead Revolver, developed by the good folks at Rockstar Games, released on May 18, 2010, in North America and on May 21, 2010, in Europe and Australia for the PlayStation 3 and Xbox 360.

Years ago, John Marston rode in a gang of outlaws, killing and stealing their way across The Wild West. They seemed like family at the time, but nothing lasts forever — tensions rose, sides were chosen, and John was left for dead. Hoping to change his ways and start anew, he settled down as a rancher with his wife and son.

Now the year is 1911, and John's old life has come back to haunt him. With several members of his old gang still at large, the newly-founded Bureau of Investigation has sent Agent Edgar Ross to arrest John and give him an ultimatum: hunt down his former accomplices or lose his family forever. With little choice remaining, John must pick up his guns one last time, and at long last settle the score with the men who betrayed him...

In practice, this leads to a game that plays pretty much like Grand Theft Auto IV in the Wild West, but you'd be hard-pressed to find someone who'd think of that as a negative. In Marston's quest to capture his old friends and save his family, he rides over miles of sprawling deserts and plains and takes on missions that advance him closer to his goal, and takes part in many, many sidequests — or, if the player so desires, just wanders around doing whatever he wants in the Wild West.

In addition to the massive single-player world, there is an equally huge multiplayer environment. In two weeks, the game was played for the equivalent of 3,700 years and sold 5.2 million copies.

On October 26, 2010, Rockstar released Undead Nightmare, a Zombie Apocalypse-themed alternate play mode taking place in an Alternate Continuity where John must fight off the living dead with few allies and weapons. If you have any tropes relating to Undead Nightmare, please place them on the Undead Nightmare page. On October 11 2011, a "Game of the Year" Edition was released that contained this add-on as well as the original game.

Rockstar also released a PC version for its launcher a year later, on November 5th, 2019 and its Steam version on December 5th.