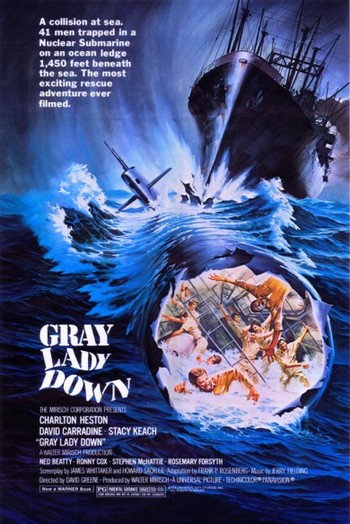 Gray Lady Down is a 1978 Disaster Movie directed by David Greene and starring Charlton Heston, David Carradine, and Stacy Keach, with Ned Beatty, Ronny Cox, Stephen McHattie, and Rosemary Forsyth in supporting roles. Christopher Reeve has a small role in his film debut.

Heston is Captain Paul Blanchard, the commander of USS Neptune, a nuclear-powered U.S. Navy submarine, who's on his last trip before being promoted to squadron commander.

While surfaced and returning to base, Neptune picks up another ship on her radar off in the distance, on what would be a collision course. The ship, a Swedish freighter with a number of equipment failures, has no idea that Neptune is in their path and is quite likely violating the rules for traveling on the open sea. As the freighter gets too close, the watch officer orders that the collision alarm be sounded. The freighter operator then makes a mistake and turns the ship even more steeply into Neptune, resulting in a collision. The submarine sinks, landing below her rated crush depth on a ledge near a steep trench.

Captain Bennett (Stacy Keach), a rescue force commander, gets a call at home announcing that a submarine has been rammed, resulting in her sinking with survivors possibly trapped inside ("Gray Lady Down"). He calls up every resource he can get his hands on, including having a DSRV (Deep Submergence Rescue Vehicle, a rescue minisub) brought in, and an experimental utility minisub called The Snark, whose captain, Gates (David Carradine) has his own ideas about how his boat is to be operated.

The rescue force must try to save the survivors before Neptune slips off the ledge, falling irretrievably into the trench and imploding.