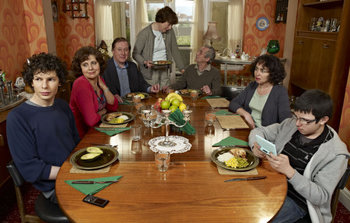 Tanya: How can you lie to your mother? You came from my womb!
Simon: Yes, but... I live in Hampstead now.
Advertisement:

Grandma's House (2010–12) is a British Dom Com following Simon Amstell As Himself, fresh from quitting his job as host of Nevermind The Buzzcocks and desperately seeking a new purpose in life.

Retreating to the bosom of his family and their get-togethers in his grandma's house, he finds they are less than sympathetic when he tells them he's leaving behind fame and fortune. In turn he struggles to deal with his mother Tanya's impending marriage to a rich but deathly dull man, his sex-obsessed cousin Adam, and his death-obsessed grandfather. The first series ran from August to September 2010, and a second series ran from April to May 2012.

Not to be confused with the similar "dysfunctional Jewish family meets for a meal" sitcom Friday Night Dinner.