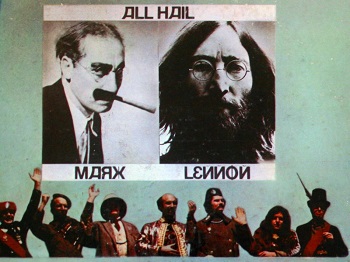 Dll Ndil Mdyaz Lziifi?
Bob Howard: You heard of Alan Turing? The father of programming?
Peter-Fred Young: Didn't he work for John Carmack?
Bob: [thinking] Oh, it's another world out there.
— "Pimpf"
Advertisement:

This trope is when somebody mistakes one historical figure for someone else (or, sometimes, for a fictional character), despite the two having little or nothing in common, exemplifying their lack of intelligence. In speculative fiction settings it may also result from the fog of history getting the information muddled.

The source of confusion varies. Maybe the names sound alike (Vladimir Lenin and John Lennon), or their fields are tangentially related (Thomas Edison and Albert Einstein), or the more contemporary figure is a reference to the older (Michelangelo Buonarroti the painter and Michelangelo the turtle).

See also Name's the Same, which is mostly for fun but can be a source of this confusion. Contrast Artistic License – History, which is when the author gets something like this confused. Compare Historical Hilarity and Wrongfully Attributed. A common form of In-Universe Factoid Failure.