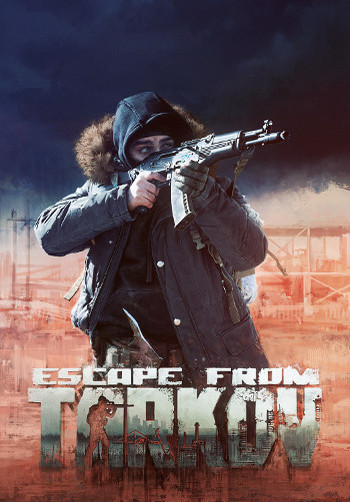 "GET READY FOR ESCAPE"

Escape from Tarkov is a hardcore and realistic online first-person looter shooter with MMO features and a story-driven walkthrough, set in the same universe as Contract Wars.

The video game is set in the fictional Norvinsk region in north-western Russia, around a "special economic zone" that served as a gateway between Russia and Europe. However, this attracted corporations with dubious intent, and the city of Tarkov became the center of a major political scandal involving corrupt corporations in the Norvinsk region. Six months later the situation erupted into an armed conflict involving the Internal Troops of Russia, United Nations peacekeepers, and two private military companies: United Security (USEC) and the Battle Encounter Assault Regiment (BEAR). The Norvinsk region's borders were sealed off, and those trapped in the middle of the local warfare were isolated from the outside world. USEC was hired by the Terra Group, one of the corrupt corporations involved in the scandal, to hinder investigations during the conflict, while BEAR was covertly hired by the Russian Government to uncover evidence about Terra Group.

The game is currently in beta-testing with one current gamemode; Raid, where the player(s) has the titular objective of escaping the city of Tarkov by working for one of these private military companies, or through the viewpoint of a Scavenger. Players spawn in on one end of the map and must make it to the other side, gathering loot along the way. However, the rest of the map also contains other players and Scavengers, both of whom will try and kill the player on sight. The unique gimmick of Raids is that whatever is brought into a Raid has the capacity to be taken and sold for profit by the other players, adding a unique macrogame level on top of the basic moment-to-moment gunplay. Adding on to this are complex gun-construction, ammo, and healing mechanics, all designed to give Tarkov a high level of tension and realism.

of a live-action web series based on the game, Escape from Tarkov: The Raid, that follows the story of a BEAR trooper named Skif.

Escape from Tarkov provides examples of the following tropes: