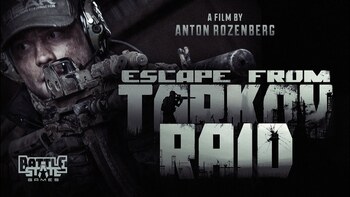 "IN 2015, TERRAGROUP INTERNATIONAL CORPORATION DEPLOYED ITS PRODUCTION FACILITIES IN THE NEW FREE ECONOMIC ZONE IN THE NORVINSK REGION."
"WHEN TERRAGROUP LABORATORIES IN TARKOV WERE INSPECTED, REPRESENTATIVES OF THE AUTHORITIES WERE FORCIBLY CONFRONTED BY THE PRIVATE MILITARY COMAPANY USEC."
"THE ARMED CONFLICT IN THE NORVINSK REGION BECAME PROTRACTED. THE TERRITORIES WERE BLOCKADED BY THE RUSSIAN ARMY AND THE POPULATION EVACUATED."
"UN PEACEKEEPING HALTED THE ACTIVE PHASE OF THE CONFLICT. HOWEVER, PRIVATE MILITARY COMPANIES CONTINUED THEIR LOCAL WAR ON TERRIROTIES CONTROLLED BY LOCAL GANGS."
"A PRIVATE MILITARY COMPANY, BEAR, WAS ESTABLISHED BY THE RUSSIAN AUTHORITIES TO CARRY OUT THEIR OPERATIONAL OBJECTIVES.""
-Opening narration

The Raid, directed by Anton Rosenburg is a live-action five-part

episodic web series based on Escape from Tarkov which itself is set in the same universe of Battlestate Games' Russia 2028, which also includes the prequel Contract Wars. It is later complied into a single hour-long video in 2021 as seen here

The series follows a Russian private military contractor named Skif, who leads a squad of BEAR (Battle Encounter Assault Recon) troopers into the city of Tarkov, located in the troubled region of Norvinsk. Sent to pick up the trail of the team whom he was originally supposed to go in first with but was mysteriously left behind, they encounter constant dangers such as roaming Scavs and a USEC (United SECurity) squad that relentlessly hunts them down for the duration of their mission.

As the casualties mount up and the missing BEARs nowhere to be found, Skif must question his loyalties and figure out an escape from the war-torn city before he too becomes lost to the darkness of Tarkov.

This web video provides examples of: