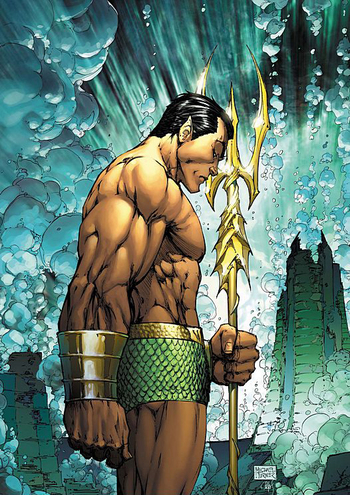 Prince Namor the Sub-Mariner is a Marvel Comics character. He's an aquatic, superstrong Anti-Hero who rules the Marvel Universe's version of Atlantis. He should not be confused with a "submariner" which is a person who crews submarines. (Though he has fought some of those!)

Namor first appeared in Martin Goodman's Marvel Mystery Comics #1 (October, 1939), the very first publication of Timely Comics, in an expanded and colourised version of a strip written for the never-published Motion Picture Funnies #1. He quickly became one of the most popular characters in Timely's stable.

The character has had occasional billing as "Marvel's First Mutant" (although in the chronology of the 616 timeline the title is just as often given to Apocalypse, who also isn't the first mutant; Namor was certainly the first to see publication, but he wasn't declared a mutant until X-Men #6). Namor McKenzie is a Half-Human Hybrid, the son of American ship captain Leonard McKenzie and Princess Fen of Atlantis; however since this romance was forbidden by her people, Fen had to raise Namor (who was born with pink skin, unlike the normally blue-skinned Atlanteans) away from the surface world.

Given to self-righteous rages, Namor attacked New York City, blaming humans for damage that Atlantis had suffered. This led to the first comic book superhero battle between him and the Human Torch (no, not that one, this one). Fortunately, Namor had a weakness for beautiful, noble women. Fair Cop Betty Dean convinced him to halt his attacks. In addition, he eventually realized that it was the Nazis who were the true menace and ended up joining a team (The Invaders, which included both the Human Torch and Captain America, among others) in order to battle them. This group would be renamed the All-Winners Squad after the war. (Note that this is a Retcon; the AWS did have their own short-lived series in 1946, but it was writer Roy Thomas in the 1970s who established that they had been The Invaders previously; they did star in their own series then.) He had a companion in his cousin, Namora.

Namor had his own magazine "Sub-Mariner Comics" which lasted for 32 issues (Fall, 1941-June, 1949), and also appeared regularly in various anthologies. But by 1949 the character was defunct. The character was revived a few years later in the pages of "Young Men" #24-28 (December, 1953-June, 1954), and "Sub-Mariner Comics" #33-42 (April, 1954 - October, 1955). Most of the stories were again written and drawn by Bill Everett, who managed to update Namor, Namora, and Betty Dean for the new decade. Everett also created tales exploring Namor's childhood and teenage years. But once this run was over, Namor became another fond memory for older readers.

Namor returned during The Silver Age of Comic Books in Fantastic Four #4 (May, 1962), after a chance meeting with the (new) Human Torch awakened his memories (lost after an enemy with mental powers erased them; he ended up as a homeless man for decades, apparently he ages very slowly). Namor then ended up once again in a villainous role, though (once again) a beautiful woman (The Invisible Woman of the Fantastic Four) convinced him to change his mind. Initially the Last of His Kind, he reunited with Atlantis in Fantastic Four Annual #1. Namor soon got his own series again, where he mostly had adventures under the sea. He fell in love with an Atlantean named Lady Dorma, though she eventually was killed. (Part of this series was adapted in animated form in the Marvel Super Heroes TV show.) He also became a founding member of The Defenders and met Namora's daughter, Namorita (of the New Warriors.)

In the 1990s, Sub-Mariner again had his own comic book series by writer/artist John Byrne, who reinvented Namor as a shrewd businessman after establishing that his rages were caused by an imbalance of oxygen in his blood that could be treated. Namor bought a surface company called Oracle using treasures rescued from the sea. This series lasted for 62 issues (April, 1990-May, 1995). Since then the character mostly appears in team books and the occasional mini-series.

Even today, Namor continues to vacillate between hero and villain; for example he has been a member of both The Illuminati (a conspiracy of Marvel heroes) and later, their Evil Counterpart (eviler, to some), The Cabal. He has recently started embracing his mutant heritage, becoming first a part of the "Dark" X-Men and then the X-Men proper.

He received another ongoing, Namor: The First Mutant, which seems to have been quietly cancelled in favor of a Fear Itself tie in starring some of the classic The Defenders cast and at least one of their legacies, followed by a new The Defenders ongoing which debuted in the winter of 2011. He was a key part of Avengers vs. X-Men as one of the "Phoenix Five" and later goes on to join the casts of New Avengers and All-New Invaders.

A version of Namor appeared in a Marvel Knights miniseries; Submariner: The Depths. In the 1950's, he terrorizes a rescue team looking for a lost group of explorers. Said explorers had been looking for Atlantis. Until they found Namor.

In spite of his importance to Marvel's early history and his presence in the 1960s animated The Marvel Super Heroes series, he didn't appear in a film adaptation until Black Panther: Wakanda Forever— in which he was reinvented with a Mayincatec overhaul and portrayed by Tenoch Huerta.

When Marvel had a dance with bankruptcy back in 1996, Namor's rights were licensed to Universal, where attempts to bring the character to film occurred between 1997 and 2006, but the project ultimately never went anywhere.