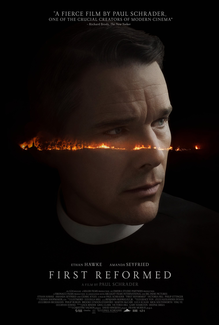 Pastor Jeffers: These are frightening times. They have to be patient.
Toller: Well, somebody has to do something!
Advertisement:

Forty-six year old Reverend Ernst Toller (Hawke) is the pastor at the historic First Reformed Church in upstate New York. Toller is dealing with a midlife crisis, struggling with the death of his son in war, a divorce, and failing health. These issues in Toller's life become more pointed when a new pregnant congregant, Mary (Seyfried), asks him to speak to her husband Michael, who Toller will learn is an environmentalist concerned about bringing another human life into what he already sees as a world doomed because of man's role in climate change.

The film premiered in August 2017 at the Venice Film Festival, and was officially released on May 18, 2018, distributed by A24. It opened to universal critical acclaim, with particular praise for Hawke's performance, and has been called Schrader's best work in years.