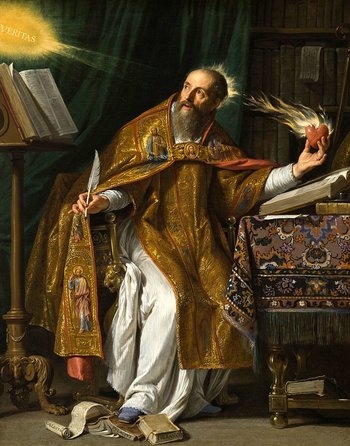 A portrait of St. Augustine by Philippe de Champaigne
Yet man, this part of your creation, wishes to praise you. You arouse him to take joy in praising you, for you have made us for yourself, and our heart is restless until it rests in you.
—St. Augustine of Hippo, The Confessions (John K. Ryan translation)
Advertisement:

Saint Augustine of Hippo (13 November 354 - 28 August 430) was a theologian, philosopher and bishop of Hippo Regius (modern-day Annaba, Algeria). His writings helped influence the development of Western philosophy and Western Christian theology and is seen as one of the most influential Christian theologians of the Western Church.

St. Augustine was born in Thagaste (modern-day Souk Ahras) on 13 November, 354 to a respectable, albeit not wealthy, family. His father Patricius was one of the curiales of the city but is a pagan. His wife was St. Monica, a Christian. They had three children: Augustine, the eldest child; Navigius, the middle child; and Perpetua, their daughter. Patricius's marriage to St. Monica was not particularly happy; her almsgiving and prayers annoyed Patricius. However, he always held her in a sort of reverence, and due to St. Monica's patience and virtues that made her the ideal of Christian mothers, Patricius himself ended up becoming a Christian. About the year 371, shortly after his reception into the Church, Patricius died and St. Monica resolved not to marry again.

St. Augustine was signed with the cross and enrolled as a catechumen. At one point, he developed a sickness of the stomach and was in danger of dying, so he asked for the sacrament of baptism. However, he recovered, so baptism was deferred (in the early days of the Christian faith, one of the steps of baptism is that the catechumen makes a profession of faith and renouncement of sin, suggesting that the catechumen must come of age first). In the meantime, he took language, literature, and rhetoric classes in Thagaste and Madauros. His studies, however, were interrupted when his father sought to prepare him for a forensic career. This required several months of getting the money necessary for the career, so St. Augustine spent his sixteenth year in idleness in Thagaste. At that time, he gave himself up to sin. He indulged in lust, theatres, and the company of licentious delinquents. One time, St. Augustine and his peers saw a pear tree and stole the pears from the tree just for fun, an incident he analyses in length in his Confessions (he admits that were he on his own, he would never have committed the deed). In spite of these, St. Augustine maintained some dignity and had a compunction that did him honor, and in his nineteenth year, he sought to break free from his sins. At one point, he came across a (now lost) work of Cicero known as ''Hortensius". The work exhorted St. Augustine to pursue philosophy, or "love of wisdom". With that, St. Augustine began to see his studies in rhetoric as a mere profession; his heart was in philosophy.

However, St. Augustine and a friend of his, Honoratus, joined a Gnostic dualistic religion known as Manichaeanism during his studies in Carthage. He was drawn in by the Manichaean's promises of free philosophy unbridled by faith, their boasts, especially their claims to have found contradictions in the Bible; and the hope of finding in their doctrine a scientific explanation of nature and all its natural phenomena. It also taught that good and evil are two conflicting principles. Those won over St. Augustine and he eventually studied it under Faustus, its most celebrated proponent. He eventually finished his studies and returned to Thagaste to teach rhetoric.

Meanwhile, St. Augustine wrote a (now lost) work on aesthetics, and he began to develop doubts about Manichaeanism. For one thing, he was disturbed by the Manichaean's teaching that man is not responsible for any evil deeds he commits; they taught those deeds are because of the movements of the stars. He also did not get a satisfactory answer from the Manichaeans about Scriptural problems, to which they insisted that "the Scriptures have been falsified." Worst of all, he did not obtain the scientific explanation and all its natural phenomena as the Manichaeans promised. Disillusioned with the false promises of Manichaeanism, he discarded their beliefs and followed the skepticism of the Academics.

St. Augustine then went to Italy to teach rhetoric. He started at Rome, but was disgusted by his students defrauding him of their tuition fees. He then went to Milan to obtain a professorship, where he encountered St. Ambrose, its bishop. His fascination with the bishop's kindness drew St. Augustine to become a regular attendant of St. Ambrose's preachings. It was through listening to St. Ambrose's preaching when he realised that a lot of the Bible's passages make more sense when interpreted in an allegorical sense. In the meantime, he came across the works of the Platonic philosophers, particularly Plato and the Neoplatonist Plotinus. Reading their works stirred him into finding truth again, yet his passions still enslaved him.

St. Monica found him in Milan and had arranged a marriage for him, but St. Augustine found the woman too young, so he agreed to wait until she comes of age. In the meantime, he had an affair that resulted in a son, Adeodatus. Realising this, St. Augustine felt ashamed. He then went through one more period of struggle and turmoil until he was prompted to read from the Bible. He read Romans 13:13-14: "Let us pass our time honourably, as by the light of day, not in revelling and drunkenness, not in lust and wantonness, not in quarrels and rivalries. Rather, arm yourselves with the Lord Jesus Christ; spend no more thought on nature and nature’s appetites." (Knox) With that, St. Augustine possessed certainty that Jesus Christ is the only way to truth and salvation. He then resigned from his professorship and went to Cassisiacum with St. Monica and his friends to be baptised.

St. Augustine went on to be ordained into the priesthood in 391 A.D. and was consecrated a bishop in 396 A.D. He then occupied the See of Hippo for thirty-four years. During his episcopacy, he wrote works defending the Christian faith against Manichaeanism, of which he was formerly a member; Donatism, a rigorist schismatic heresy that taught that the clergy must be without fault to be effective in their ministry and for the sacraments to be valid; Pelagianism, which taught that man could earn righteousness by simply using his free choice to follow God's commandments (in practice, the Pelagians trivialized the role of grace); and Arianism, which taught that Jesus was not God, but rather a creation of God made out of a similar substance.

He spent the last years of his life ministering to the people of Hippo while the Visigoths attacked Rome in 410; that was when he started writing one of his most important works, The City of God, which he continued writing until he completed it in 426. Later, the Vandals, a Germanic tribe that converted to Arianism, invaded Hippo and besieged it in the spring of 430. At that time, however, St. Augustine developed what he recognised was a fatal illness. He spent his final days with patience and prayer, requesting that the penitential Psalms of David be hung on the walls for him to read. He also directed the library of the church in Hippo that all the books inside be preserved.

On 28 August 430, St. Augustine of Hippo died. Shortly after his death, the Vandals initially lifted the siege of Hippo, but returned to raze the city; St. Augustine's church and library were left untouched. He would then be canonised by popular acclaim and declared Doctor of the Church in 1298 by Pope Boniface VIII.

Ironically, though he championed what he thought was Catholic orthodoxy in the early 5th century, most of his theological conclusions would later be rejected by the Catholic Church, turning out to be hardly more orthodox than many of those he accused of heresy. In fact, Augustinian theology would form the foundation for many Protestant movements over a thousand years later. However, since Augustine was already considered a saint and had contributed significantly to the development of Catholic thought, he could hardly be retroactively declared a heretic, so Catholics variously claim his theology has been "misinterpreted," "misunderstood" or "exaggerated." Augustine's own views evolved over the course of his life (generally becoming more hard-line as he got older), and the fact that his prodigious works span decades on nearly every subject means there's probably an Augustinian quote out there for anyone who wants to suggest he supported one position over another.

Major Works:St. Augustine was a prolific writer, having written 132 works. Some of his works include...