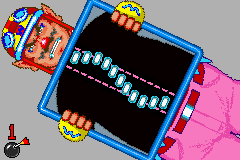 Scary moments, unintentional or otherwise, from the WarioWare microgame series.