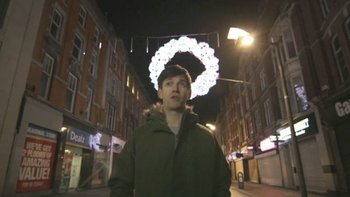 "Magnificent bastards in the lost city of Dutch Gold..."
"I'm just saying you might get sick of it all...but you might miss it too..."
Advertisement:

Just Saying is an Irish short film, made in 2012. It is written and directed by Dave Tynan

It features a young twenty-something Irish boy, played by actor Emmet Kirwan, walking through Dublin city at night. He recites a poem addressing the state of young people in the country - and what it means to be Irish. At the end of the film, the boy is seen on a ship sailing off - implying he's emigrating like so many other young Irish people.

The film was a viral sensation, clocking up over 200,000 views in a short amount of time. Based by Dave Tynan on his own experiences as an emigrant abroad, the film struck a chord with the generation of Irish teens and twenty-somethings forced to move abroad in the wake of the economic recession. The film can be viewed here